Hey all, good debate and exactly the reason I wanted to develop the How To here. I’ll copy all the best practice over when we are finished.

The bolts in question are threaded all the way to the head of the bolt It would be near impossible to predict the stretch on a threaded section of bolt and even if you could do so would be totally inaccurate hence the reason why stretch bolts have the machined dia under the head and before the thread, this is a close tolerance feature on a stretch bolt to ensure the correct amount of stretch at the correct torque plus angular tightening

I’m going to take a bolt out and check that. I’ll be back with what I find.
Paul that’s not a challenge, just me wanting to be thorough. Also I will post pictures of my Golf bolt failure, appreciate your opinion on it.
S

I think torque / angle is sometimes used on fasteners to give a more precise clamping load and not just for torque to yield super critical applications.
I recently did the TDi cambelt and the crank pulley capscrews are fully threaded. They are very short - probably too short to work as a true stretch bolt but they are still torque / angle. Another example is one of the pulley (think its the tensioner) mountings is a stud fastener and the nut spec it torque / angle. Audi specify a new nut but changing the stud is not mandatory. This would not apply if this was a true 'stretch' stud
Memory could be playing tricks but is the front strut lower split clam fastener fully threaded and torque angle

Spike. You may well be right in your statement about not being a true stretch bolt
Providing a torque plus an angle on a none stretch bolt makes no engineering sense at all. But that would not prevent it being done

philward said:
I’m going to take a bolt out and check that. I’ll be back with what I find.
Paul that’s not a challenge, just me wanting to be thorough. Also I will post pictures of my Golf bolt failure, appreciate your opinion on it.
Click to expand...

Hi Phil. I appreciate you trying to get to the bottom of this

Found an article on bolt torque methods which explains the differences -

Torque specifications ? What do I need them for, can't I just pull on the wrench until the bolt is tight ??
www.enginerepairshop.com

All yield bolts have the plain ‘waist’ area we’re the bolt stretches in a controlled manor. Which cannot be achieved on an all threaded bolt

This the failed bolt from my Golf front subframe, required torque 130Nm. The last break on the torque wrench was at 100Nm set at 110Nm the bolt started necking and the wrench it was comfortably winding it to breaking. The conclusion I've come to after reading all above is that that is not a stretch bolt. Despite it being a genuine VW replacement it was just not upto the job. 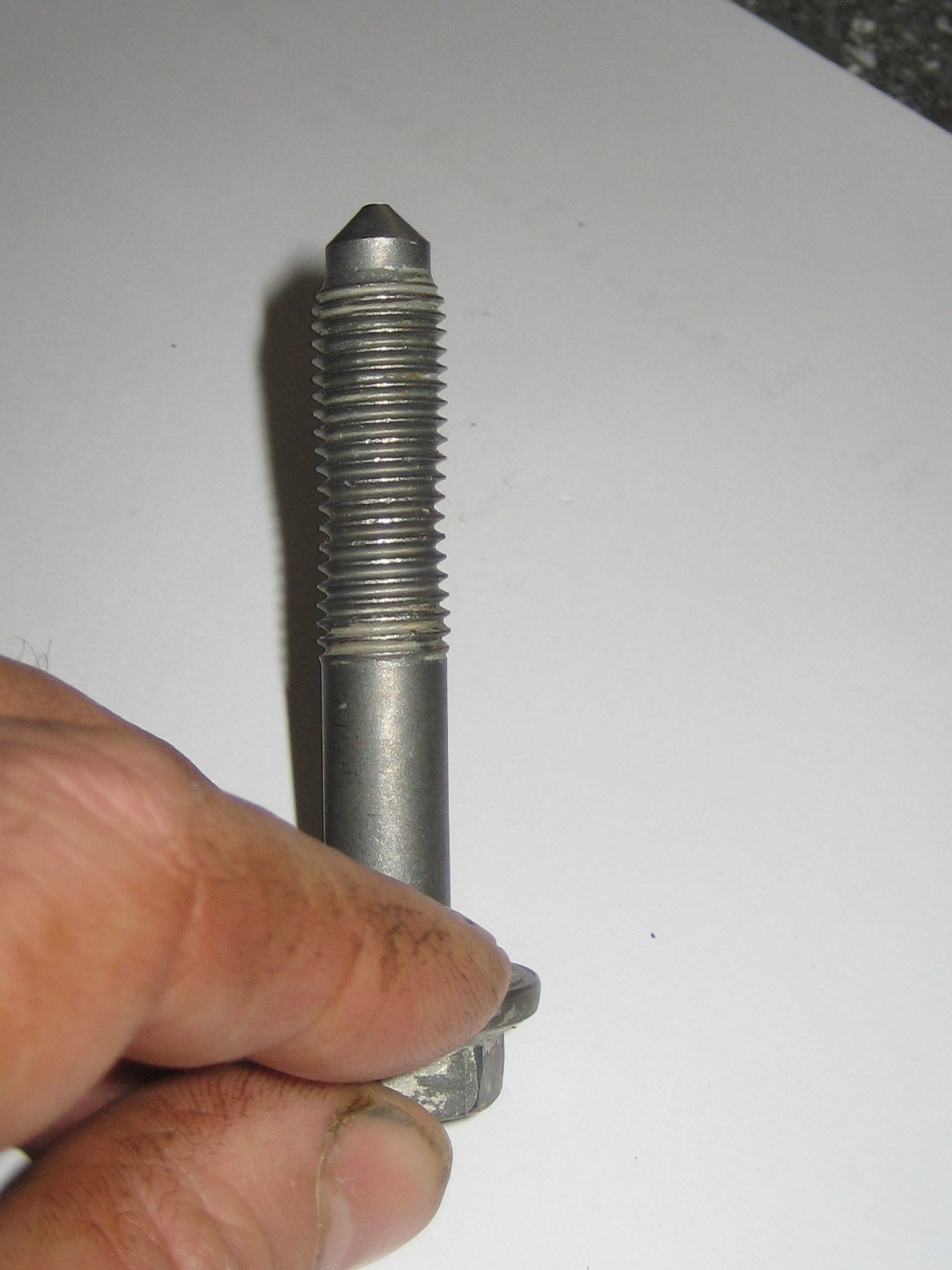 It does have a plain reduced diameter portion but that could be to retain the washer. Thoughts? Anybody got a picture of a known stretch bolt?

It does have a plain reduced diameter portion but that could be to retain the washer. Thoughts? Anybody got a picture of a known stretch bolt?
Click to expand...

Just for info only this bolt it appears may no longer be available from Audi uk / tps but could be ordered from audi tradition in germany.

Interesting, I bought 6 about 4 weeks ago. I had to wait for them and thought they were on back order.
There is a possibility my local dealer combined a number of customers orders into one Traditiom order. They do that to spread the delivery cost. Not been charged delivery as yet.

Preparation for a clean axle drop I also try to avoid applying unknown large torques to a car on axle stands; my first task therefore was to remove the screws securing the trim at the lower front edge of the rear wheel arches. Some of you may also have to remove heat shields. With the trim lose the bush to mounting bolt can be accessed: Or as in my case a sturdy breaker will break all 6 mounting to space frame bolts, my objective is to break the majority of torque while still leaving sufficient to hold the mountings to the space frame. The car was then lifted on the rear axle and stands placed under the jacking points. I like more than one method of support and usually leave jacks in position with the majority of weight on the stands. In this case I put the lift in place before working under the car: I clamped the space frame to axle flexible brake pipes and then cut them with a saw on the axle side of the clamp. The pipe nuts were badly corroded and the flexible cheap to replace (the manual advises that detaching the flexible pipe bracket from the space frame will allow sufficient drop to change bushes without removing the axle from the car). I also cut the solid pipe at the rear of the drums.

ABS sensors were detached and put out of the way.

Drums were removed and hand brake cables detached from the shoe linkage and put out of the way; threaded through the stands (the manual advises that detaching the cable claps from the space frame in front of the fuel tank will allow sufficient drop to change bushes without removing the axle from the car)

Remove the damper bottom securing bolts and remove the springs. The manual recommends spring compressors but I simply held the axle to remove the bolt, lowered the axle and manoeuvred the springs out. Remove 6 mounting to space frame bolts, I first raised my lift a little to ensure the mounting bracket would be held against the space frame. If you are removing the mounting bracket to bush long bolt then please give some consideration as to how to do this safely (I had the axle assembly in effect clamped against the space frame, which is not possible if you are removing the 2 long bolts). The manual advises the use of straps to secure the axle, then remove the bolts safely.

Remove straps if you have used them, lower the axle. I did this onto cardboard bike boxes and then dragged the whole thing out, cardboard, the axle, axle still on the lowered lift; the whole lot on cardboard.

My axle was a bit of a mess: If you are working on a bench and the intention is to blast and refinish the axle, remove stub axles, back plates, brake pipes pipe clips, hand brake clips etc. Makes the axle easier to handle and takes away the risk of accidentally damaging components. Items that need to be replaced can be on order as work progresses.

Note, the orientation of the bush is important. I recommend taking photographs to record the correct positioning of the bush in the axle before removal. These should be referred to when fitting the new bushes. There is a method of removing the bush that is posted regularly on the internet, drill the rubber from within the bush and then saw through the resin outer sleeve of the bush in two places along the whole length, cuts should be roughly diametrically opposite and be careful not to cut into the steel of the axle. The two halves now knockout.

A quick and dirty method, again regularly reported on the internet, is to burn the rubber with oxy acetylene; not sure about this one but if you go for this method make sure you have PPE and understanding neighbours. Cut the outer resin as above.

There are two things to consider before you go down this route. Firstly the tools that fit the bush also remove the bush, so unless you have a tool that will only fit bushes, the tools you need to buy to fit are also likely to remove and keep the bush in one piece. Secondly keeping the bush in one piece is good if you intend to restore the axle by blasting it. The old bush can be refitted to protect the bush location surfaces of the axle from blasting grit and paint spray or powder coat.

Removing as described in the manual

DIY tools set up to provide the method of removal described in the manual: To set this tool up select the largest sleeve that will pass through the bush location on the axle. It is not possible to select the correct sleeve by measuring the new bush. 71mm suggests a 70mm sleeve would be correct. However the resin bush compresses as it enters the housing so the correct bush is one that just slides inside the bush location. 68 mm OD is the correct sleeve Now select the smallest sleeve that the larger diameter end of the bush will slide inside. A large bearing puller clamped to the axle provides a thrust surface for the last sleeve selected. Set it all up around the bush Get the spanners out and start winding, the bushes come out easily when the axle is in good condition.

The next section describes how to remove the bush if the method described in the manual is unsuccessful.
Last edited: 13 Sep 2020

Sorry @philward completely off topic but I need to ask about that cool wee red jack platform! What is it called i need to find me one of those

cheechy said:
Sorry @philward completely off topic but I need to ask about that cool wee red jack platform! What is it called i need to find me one of those
Click to expand...

It’s not off topic at all, it’s a motor bike jack / stand. I use it for all of those jobs where you have to precariously balance a lump of wood on a trolly jack. Supporting your engine on its sump, lifting your gearbox into position, supporting your exhaust to replace the rubbers, dropping your rear axle etc etc.
One of these but much cheaper when I bought it. https://www.ebay.co.uk/itm/123760208127
Edit just checked, I paid a fraction under £40 delivered. Been worth every penny, shop around.
Last edited: 14 Aug 2020
S

Great write-up and photos. There is always something special about restoring old parts, often making them better than new.
I'm not in Phil's league but still get a kick out of taking a file and easing the sharp edges of a bracket or lightly countersinking holes before re-painting.

Keep up the good work

The bush removal draft has been updated; I think. The internet is painfully slow today.
Last edited: 15 Aug 2020

The bush removal method described in the manual may not succeed, his can occur for example when the axle is badly corroded. Rust build up can prevent the sleeve positioned to push the bush out from even contacting the bush. The forces required cause the bearing puller to slip damaging the outer surface of the bush housing / tube. This section describes an alternative method of removing the bush in a reasonably complete condition.
Heavy rust build up preventing bush removal: The bush is flexible though and can be pushed over the rust form the other side providing the larger diameter rim of the bush is first cut off. A hacksaw should cut the resin easily and quickly. I used a sharp woodworking chisel. Then it is a matter selecting the smallest sleeve that will slide over the new relaxed bush:

Set up the sleeves around the bush, take a big ratchet and start winding: The sleeve to receive the bush was not quite deep enough so the bush was drifted over the last few mm of rust.