... did anyone fit pressed metal number plates into their A2OC holders? If so, please would you mind sharing photos.

I didn't order initially as I had just fitted new plates using double sided sticky pads. But despite using double the recommended number the front plate keeps popping off at one end. So today as it's hot I attempt to remove the sticky pads and fit the A2 club surrounds.

On the rear I forgot that there is a rubber membrane. I suppose it is there to stop drumming but then why not at the front as well?

So I temporarily removed it and then cleaned the black glue etc with Bug and Tar remover. Had to keep changing the rag to a clean bit otherwise one just smeared the glue. Then waxed and reapplied the rubber membrane now in bits.

The sticky pads came away with the pressed metal number plates.

I laid it face down on a newspaper and used a large and strong freezer scrapper to remove the foam bits and more Bug and Tar remover to remove more residue but did not aim to remove everything. Washed them in warm soapy water.

When fitting I used 25mm M6 bolts as I had them, but one bolt refused to screw fully into the captive nut. So I've ordered some 20mm M6 plastic bolts which I can either force in or cut a bit shorter. Also no risk of corrosion.

At the front, half the sticky pads remained on the car and half on the number plate. Again used Bug and Tar remover and the freezer scrapper. I didn't seem to harm the paintwork. Photo is the third application and then the finished area before waxing. Already 3 holes and I'm about to make a 4th. Why there are no captive nuts at the front I don't know.

The front is curved so I placed 2 self tapping screws about 15% in from each end using one of the existing holes. I think I will replace these with plastic nuts and bolts as more secure. It was a bit of a job to clip the numberplate in, due to the surround now being forced to a curve, but as the photo shows the ends still stick out a bit.

They are a good way to advertise the club and in the future it will be a 10 second job to replace the plates.

Oh gosh. That turned out to be a bit of a faff for you. Glad you got them on though. They look good T
J

JIGSAW said:
After chatting with Andre , "Phonix" over the weekend i really liked there clubs group buy of number plate surrounds , he kindly let me borrow one of the ones he keeps for club members for a few snaps , perhaps we as a club could also orginise a group buy of these as i think they look great, perhaps a german speaking member could get in touch with the company and look into such a purchase for us all and slighly change the design with our A2oc Owners Club and A2s on the Logo ..

The company Details are in the photos , hoping we can Organise something like this as i think they would be a Great add on

Click on Merchandise>shop in the top main bar. You might have to expand the bar by clicking > if you cannot see it.

Hi Josh - as Andrew has said, we do have these in the merchnadise shop now. You can order some online, and I'll be bringing some along to VATM, Kimbolton and Audis in the Park for people to buy there too

These are mega. Thank you.

Hedge said:
These are mega. Thank you.

Finally got round to fitting my number plate surrounds with my new 'A2' registration number - looking good! 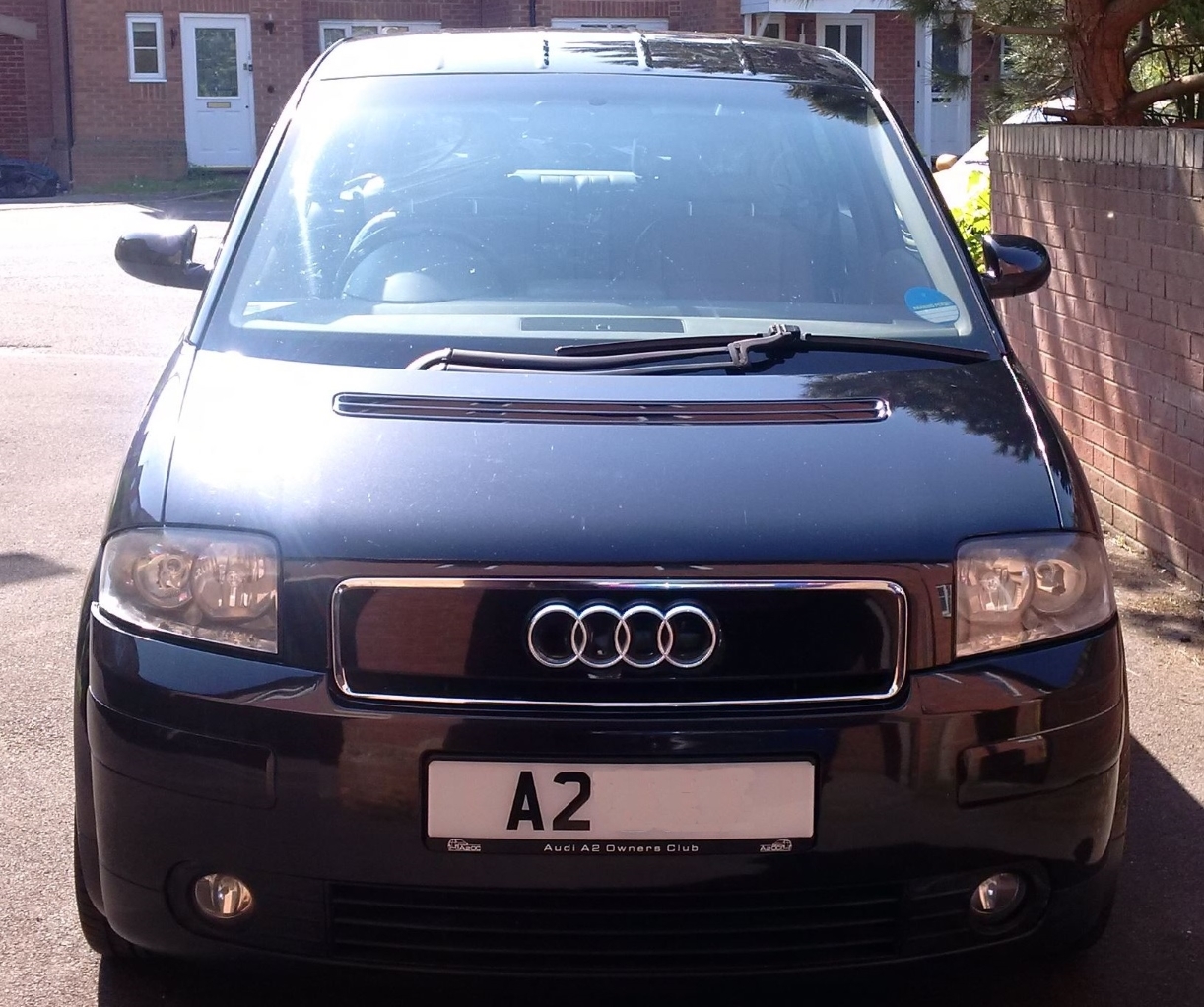 I used a permanent red marker to try to add some colour to then number plate holders and reproduce the colour of the A2OC Logo.
I like it but not everyone would I guess.

I think that would go really well with a red A2, maybe black or silver as well. Not so sure about my other light blue one though.

Yes it does depend on the colour of the A2. A black car would look good but as you say, not sure about a blue one.
This is a comparison “before and after” shot. 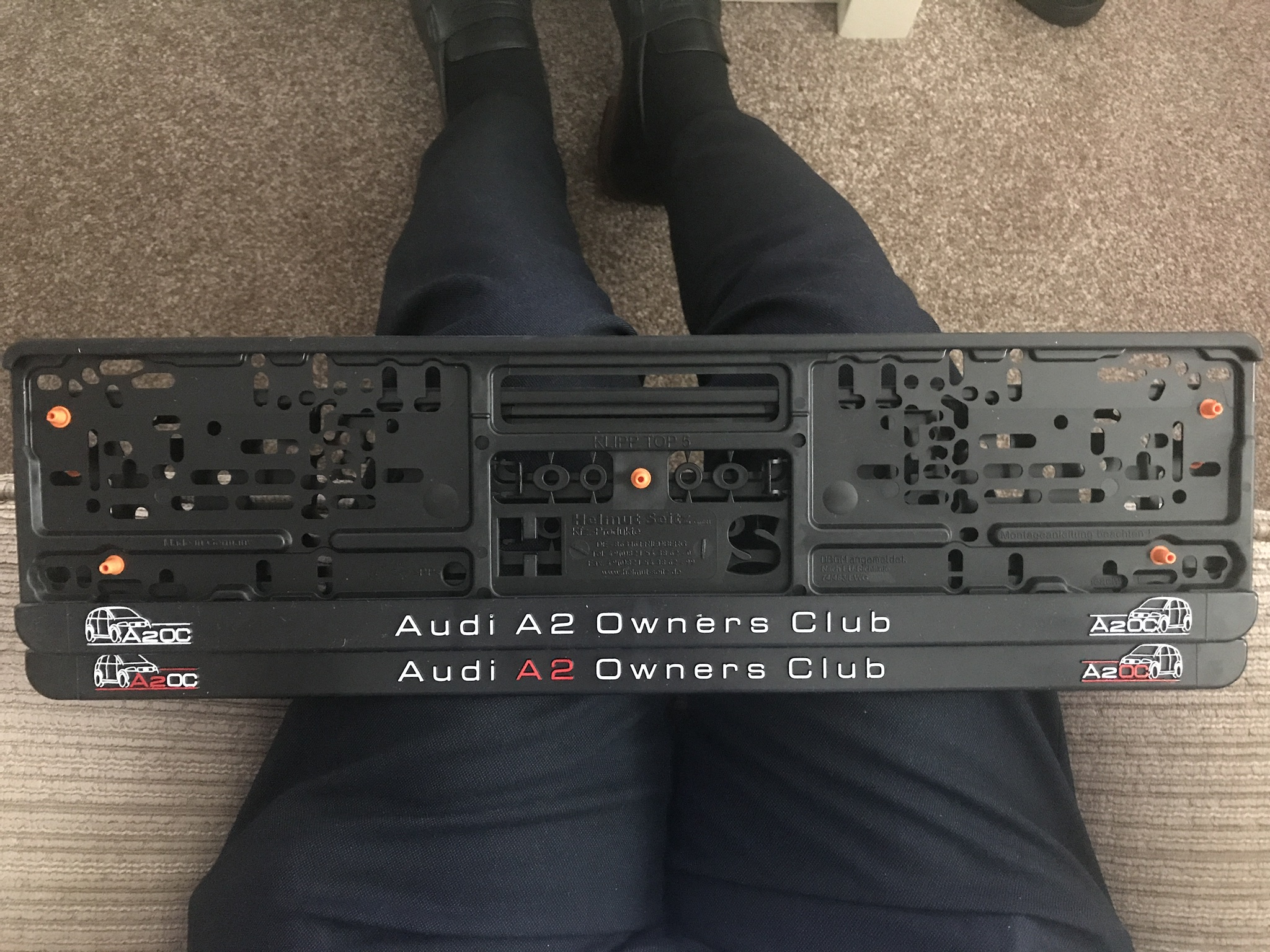 I really like the red on the logo steve

Got mine, many thanks. Job for the weekend I guess!

Jellybean said:
Got mine, many thanks. Job for the weekend I guess!
Click to expand...