Is it possible to change the bush without removing the carrier bracket ?

I am afraid I dont have the definite answer, but I reflected a bit upon it here:
https://www.a2oc.net/community/inde...ing-a-badly-rusted-wishbone.42069/post-381548

@Skipton01 , I would be curious to know which tool you had for pressing the bush out?

Yes ..I will pop down my mates tomorrow and upload a picture of it ..
Found this similar kit to his but this is more diy ...you get the idea 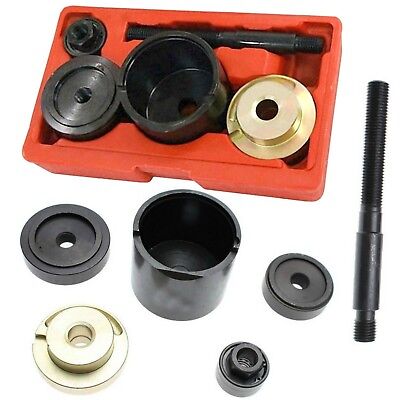 This is the tool I used. Although I had to remove the alloy wishbone bracket to drill out a broken bolt, yes, with the tool it's perfectly possibly to change the bush in situ.
To get the new wishbone into the bush, I used a ratchet strap - the tie down things you use on roof racks etc. Plenty of silicone lube (WD40 silicone was used) on the bush and the arm and it slid in with remarkable ease.

Skipton01 said:
So, what was it that Menno said above? Don't worry too much!

Things didn't go too well today. Been out on the car from 10am till 6pm and got one side done. Dennis (the storm), was quite kind though, so I cracked on as best I could.

The bolt, the troublesome one that strips threads in the alloy bracket, well it decided to play a new trick on me. It snapped. Yes, I managed to shear off a 10.9 high tensile bolt so I had no choice to remove the bracket from the subframe. And in doing so, the top ARB bracket bolt also snapped off. So, it was driveshaft out, track rod off, ball joint removed and then cut the ARB bracket with the trusty Dremel and then wiggle out the old wishbone and alloy bracket.

Take into Skipton workshop and first thing was to cut off the remaining wishbone arm to the front bush, so I could get the bush off and then get to the sheared off bolt.

10 mins of angle grinder action later, the bolt end was revealed. Flip over, press out the back of the wishbone, very easy to do with a standard puller.

Then it was grind down the sheared bolt to be flush with the alloy bracket, centre punch and drill a pilot in the middle of the bolt. Fine - 3mm hole drilled and then the b****r goes and snaps off in the bolt. As the drill bit is ultra hard, I then had to drill 2 more holes either side of it, so I could get needle nose pliers in to pull the snapped bit out.

Next up, widen the hole out gradually to 10mm at which point the remaining bolt material started to unwind from the threads and then it was a simple 2 pass with a tap. Nice clean threads revealed and no need for helicoils which is good.

Then, grind off the remaining ARB bracket and tap out the remaining bolt - a job made easy as the bolt was super hot from grinding and the hole it passes through is not threaded.

Tool from ebay worked like a charm to press out the old trailing bush and press in the new one. Clean up all the bores with a wire brush on the trusty Dremel, liberal dosing of copper grease and then it was re-assemble onto Tank.

I've got 2 new alloy brackets on order as next time the job is needing to be done, I know that I'll need them. I'll also pick up a new ARB bracket on Monday - it's secured by a split bracket on the OSF at the moment, which will be fine for the time being.

Everything went back with copper grease liberally applied, wheel is now nicely centred again in the arch and the good news for the NSF wishbone is that it's in much better condition than the other side, so that one will be replaced when the weather is a bit better and there's longer daylight too.

No photos I'm afraid, as between the rain and the grease, my hands were in no state to get around the camera.
Click to expand...

Mr Skipton, I'm so sorry!
It's a "sometimes you win, sometimes you lose" thing, but I'm glad and happy that you've won in the end.

In the future I will be more cautious with ventilating my thoughts and experiences in technical matters regarding the A2.

There is always a place for optimism @Menno - helps keep us cheerful.

Sent from my iPhone using Tapatalk

I look forward to anything he writes about

I am trying to order a pair of new Arms and Bushes for my TDI 90 and despite reading this thread, am still confused:

Am I right in thinking that the forged arms with the integral front bushes are the same for all models (except the 1.2) and it is only the rear bush that is pressed into the so-called aluminium consule that is different?

That's my understanding yes. By which token, I ought to be changing one of my rear bushes from when I put a secondhand cast arm complete with console from a petrol car on my TDI after a lower balljoint went.

I am trying to order a pair of new Arms and Bushes for my TDI 90 and despite reading this thread, am still confused:

Am I right in thinking that the forged arms with the integral front bushes are the same for all models (except the 1.2) and it is only the rear bush that is pressed into the so-called aluminium consule that is different?

No I disagree the forged petrol control arms are different to the diesel arms different part numbers according to lemforder and they make the best quality ones the diesel lemforder part numbers are 27036 and 27037
In comparison the petrol versions are 27034 and 27035 ..don’t let any one tell you the bush is the same it’s not ..

spartacus 68 said:
Wow, absolutely shocking. What did they do - simply wave it through it's MOT?

I take the car has an engine under tray? That said the arms should still be visible on an MOT.

I changed the wishbone arms on my wife's A2 and opted for Meyle parts a couple of years ago. The car is 2003, but it was the integral balljoint version, not the pressed steel version which looks like blue cheese!

So, is this Meyle wrap with its part number, which is in the picture, made of cast steel or pressed steel?

gromand said:
So, is this Meyle wrap with its part number, which is in the picture, made of cast steel or pressed steel?

Bought these for one of mine recently for tdi 75 cast .i also replaced the other bushes the end of the control arm locates into .lemforder 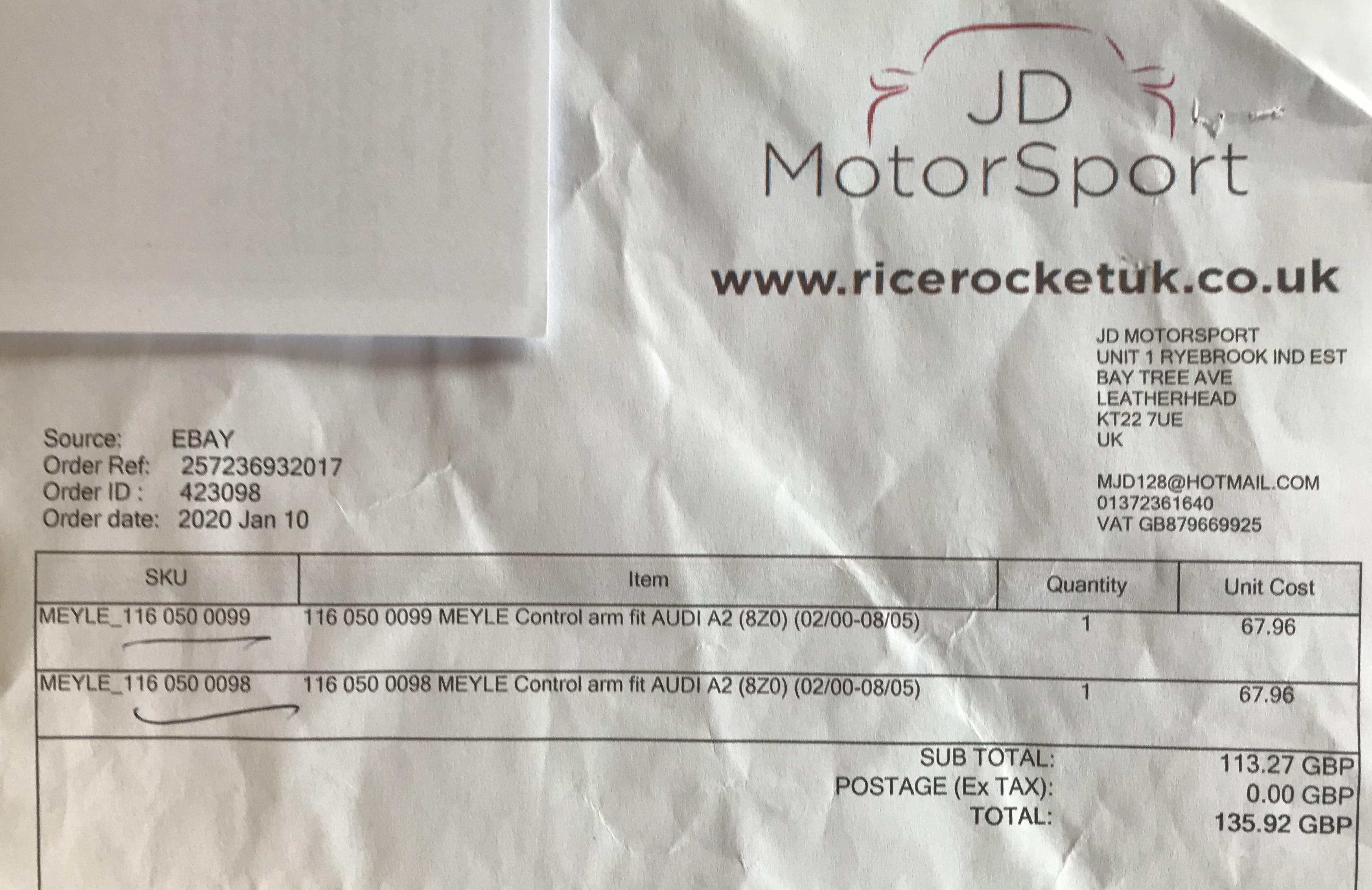 Yes, this is how we did it. I made a thread about it as well.

The last couple of days were spent renewing the components on the front of my sons A2 1.4i, this is a pig of a job and I wouldn't recommend it to anyone. We started at 3pm on Friday, worked until 9.30pm, then Saturday 9.30am to 8pm, Sunday was just about tidying and finishing the little bits...
www.a2oc.net

It would actually be really useful to have a summary of which parts are the solid version, for diesels (in my case!) and the part numbers. Can anyone help with this?

EDIT: I took the time to answer my own question and have come up with what I believe to be the ultimate cross-reference resource for A2 diesel solid TCA / wishbones! Here are all the part numbers from brands I’ve heard of:


EDIT: To be clear, the above referenced parts may be referred to as forged or cast; there is some debate as to how they are made - but in any case we are talking about the solid type of arms that are fitted to earlier A2s up until around 2002; later versions are the pressed steel plate type that rot unseen (and are hence the catalyst for this thread in the first place). On some sites these parts are referred to as being manufactured from steel, but I can assure you that to the best of my knowledge, if you order any of the above then they will be the correct (early) type.

EDIT 2: While updating the above to include MOOG and QH part numbers, I found this incredible resource which has even more manufacturers & part numbers listed: 8Z0407151L and 8Z0407152L

Note that as mentioned above, the petrol arms are different only in as far as the rubber bush that comes supplied with the arms is different (lighter duty), however the consensus is that all arms will physically fit all cars - and I have yet to see any reports that fitting diesel arms to a petrol car (or indeed, the other way around) makes any noticable difference in ride, noise, vibration or longevity! For completeness, the petrol Lemforder arm part numbers are 27034 and 27035.


Other necessary info needed for this job that I’ve mined from this thread for the benefit of myself and other members:

Bush removal / installation tool: as per the above post by Mike

Thanks
Last edited: Thursday at 6:51 PM

Well as per Merlin’s blog thread, check out the state of my apparently / outwardly in good condition arms when they came off and were inspected! This backs up the point of this thread - If you don’t know what condition your arms are in and they are the later pressed steel type - assume they are bad and need replacing urgently, even if they look fine from the outside.

Nice information gathering. Also worth noting QH cast arms part numbers QH2042S (left) and QH2043S (right). These can be had for around £37 each and have been used by other members(@cheechy and @murdo I believe).
A

First a big thank you for the summary, I have kept putting off the hours of trawling through the thread to dig out this summary.

On your note of the Lemforder part number for petrol are they valid for both petrol versions? I appreciate the lighter 1.4 engine merits a different number but would have thought the heavier 1.6 would be on a par with the TDI. Any comment (anyone)?

Suggest you edit the summary to include further comments such as the QH arms and when complete it would be great to put it in its own thread and convince admin to make it a closed sticky.

Happy to update with the QH part numbers - I didn’t include them as I thought there was a suggestion of questionable quality - however if @cheechy or @murdo or others with QH arms could confirm this is not then case then great.

Also if anyone else has used any other brand, you know the part numbers and are satisfied with the quality then these could be added too.

@Andrew I think the consensus seems to be that you can use a diesel part on a petrol or vice versa - It cannot do any harm so just go with what you can find and feel comfortable with.

@Special edition / @Proghound, let me know if you think it would be valuable to take up @Andrew’s suggestion of a sticky, I must admit it took several hours of solid reading/ googling / general concentration to get all the info into my head so I knew what was what on this topic!
Last edited: Thursday at 6:44 PM
You must log in or register to reply here.
Share:
Facebook Twitter Reddit Pinterest Tumblr WhatsApp Email Link
Top