I’ve been on this little problem for a while now and am hitting a bit of a brick wall.


I’ve now had two door locking units that have behaved in exactly the same way, they lock, but seem to deadlock and then won’t unlock.

I’m ruling out the locking units because to have two of them behave in the same way is too much of a coincidence. Vcds can’t seem to talk to the door lock so I’m beginning to think it’s the window motor/control unit.

Just some background the car had a butchered door lock when I got it so I’ve never seen it lock/unlock on this side. The two motors I’ve been sent have been supplied from a reputable source as well.

Is there anyway I can test this theory? Or is there something else I should be looking at

I have similar problem but in my A2 VCDS says as error for passenger door and rear right door “ won’t desafe”.

@Jayw13702 Your video is not available. Are we talking front or rear door locks and left or right. I know it was on your other post but to make things easier here. I would be thinking alone the lines of door controller. You have checked with a meter if the locks are receiving any signals when commanded?

@paolo_audi Won't "desafe" normally is the internal circuit board solder points have / are cracked or dry and need reflowing.

audifan said:
@Jayw13702 Your video is not available. Are we talking front or rear door locks and left or right. I know it was on your other post but to make things easier here. I would be thinking alone the lines of door controller. You have checked with a meter if the locks are receiving any signals when commanded?
Click to expand...

Sorry changed the settings so now it can be viewed.

Its the NSF door again, the one that stuck last time.

The lock does indeed go to "safe" but does not "desafe". Is the clicking we hear on the video firstly your actual lock or someone else's? Is the clicking from the switch or internal to the lock? If you have a lock not fitted to the car I would carefully disassemble it to get inside the electrical half. You would then see how the microswitches power the motors for different actions. There could even be a fault on the lock microswitch that still sends power to the motor and maintains it in the locked position regardless.

I think I may have solved it….

So I’ve robbed the door control module from the NSR door, connected that and the lock pinged into life.

Can I split the control module from the window motor or are they all one item?

I have never opened a door controller module myself. So can not say. Have a good look and if there are fixings and clips then yes, even if it is only a panel that can be removed with the rest of the unit complete.
A

Hello, I have recently had the problem of my rear left door causing the locks to cycle when I put the key in the ignition. It was intermittent, although it happened seemingly more with a colder ambient temperature. VCDS confirmed which door was causing the issues, with the fault of 'wont...
www.a2oc.net

@Andrew not the lock it is the controller
A

audifan said:
@Andrew not the lock it is the controller
Click to expand...

audifan said:
@paolo_audi Won't "desafe" normally is the internal circuit board solder points have / are cracked or dry and need reflowing.
Click to expand...

So it means I can solve without replacing the whole lock module ? I also have problem of interior light non working with doors with desafe error…

You may end up just replacing the lock. Is it the same door that does not switch the interior light. It is a different microswitch for the interior light ( the door open microswitch ) and this is external to the lock. The internal ones on the board control the locking and unlocking.
To work on the microswitches you have to remove the lock from the door, so quicker to immediately replace the lock with a good one then you can take the lock apart at your leisure.

I have read somewhere that the micro chip that detects door open could be just dirty. I am asking myself if it could be a good idea to remove door card and mounting metal sheet and then try to clean the microchip ( I suppose it is at lower part of lock module ) using some isopropyl alcohol. I use it often to clean dirty magnetic actuators ( for my job ) with great result.
It is a possible idea or just a dream ?

If you are on about the door open microswitch, then removing the inner door panel unfortunately will not allow you access to this microswitch. As you look at the rear face of your door you can see where the lock pawl rotates across to latch the door. Well on the lock immediately below that pawl is the door open microswitch. Generally these micro switches do not have a solder issue but can have three faults. The tiny rubber cap on the top of the switch can be damaged or missing, the switch can just be full of old grease / gunk etc and the plastic coating on the cam part of the lock pawl can be damaged and flaking off.
The first would need a new microswitch. The second a good clean with IPA several times to flush everything down through the door. The third would need a new lock assembly. So if it is thesecond then there is a chance it can be recovered by cleaning but in the other 2 cases you are looking at replacing the lock assembly. When replacing the lock assembly you will need to get the same part number as the one already fitted to ensure compatibility.
Here are pictures of the areas I am talking about.. 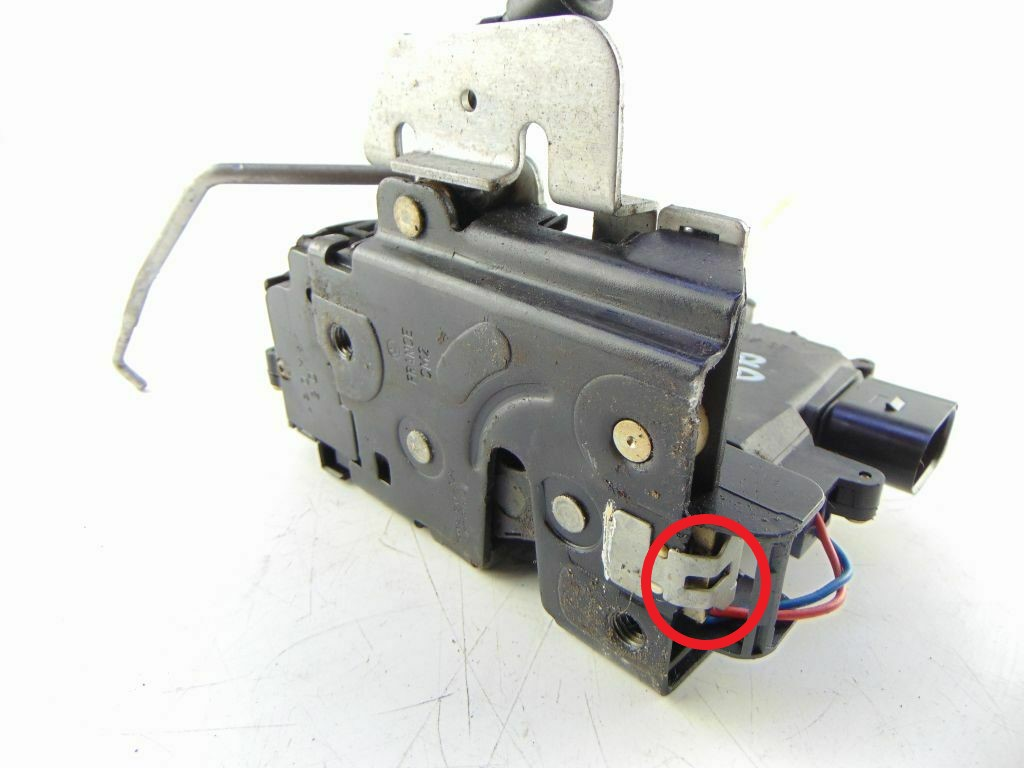 In this picture of a right hand front door lock the red circle is the clip that holds the door open microswitch in place - you can see the red and blue wires going to it. In the notch in the rear face you can see the pawl. The gap between the pawl and the rear face of the lock is where you will need to apply the IPA, the fluid will come out the gaps around the door open microswitch.

Great explanation ! Thanks
What about if I would try to insert the IPA spray cannula into lock as shown in the picture and flush from there ? IPA until it is completely dry is an electrical conductor so may be it would be better to remove door lock fuse for about 30min after IPA wash ? 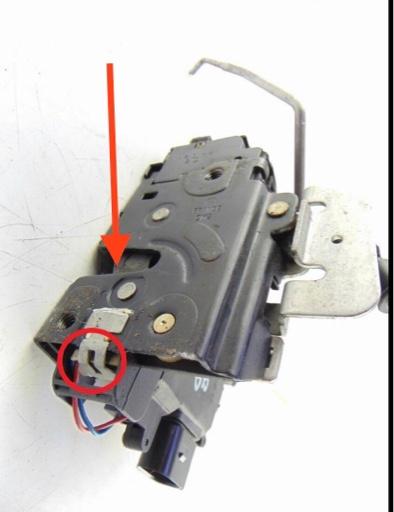 Yes that is where to spray the IPA. The cam is the lower part of that pawl and the microswitch button rides on it. No need to pull the fuse, but to be safe why not. With the door open close the pawl with a screwdriver and spray, repeat with the pawl in the open position. you could also if VERY careful see if you could get something like a cotton bud in there to lift out any grease near the top. Do not be tempted to get the cotton bud down into the microswitch incase you damage it.

Thanks so much ! I will try to clean the micro switch with IPA keeping my finger crossed.
Will let you know result …

I have tried to clean the micro switch with IPA by flushing from the lock. After cleaning it, it has worked for 5 mins then it stops to work again. I will try to clean it again but it seems the right way …