Hi,
I’ve got a TDi 75 and the past couple of days when I’ve had a warm or slightly warm engine the revs have been a bit erratic when I start the car.
The revs jump immediately to 1500 - 2000 revs blip twice and then settle down to a steady normal tick over. It’s like I’m giving it a couple of blips with the throttle. (I’m not

I though it was a one off, but it’s happened three times now but didn’t happen this morning when the engine was started from cold.

The other thing I noticed on the way home from work was my temperature didn’t leave the 60 degree minimum on the gauge. On this journey it’s always at 90.

There was warm air through the vents etc and it appeared to heat up as normal and take the same amount of time. It was showing an outside temp of 8 degrees and for info I don’t have a webasto heater.

I’m thinking the temperature sensor and would just like some thoughts if this would cause the erratic revs on starting. Am I on the right lines.

leaking injectors, dropping fuel on to the piston crown, when it starts there is excess fuel, hence the high revs until the fuel is burned away, then settles to a correct tick over.
A diesel purge with liqu molly is a very goos start to resolving the problem, as is quality diesel for a few tanks

The coolant temp sensor is effectively two sensors side by side, one for the gauge, one for the ECU. Yours has gone on the gauge side at least, but that shouldn't be giving you that revving problem on startup. If it's also gone on the ECU side, it would make the ECU over-fuel once the engine is starting to get warm, because the ECU would not realise that it was warming up.

Marcus @ WOM recently mended the loom for the fuel temp sensor on one of my TDI75's while it was in. When I picked it up he asked if I had been getting any revving on startup - although I hadn't, but mentioning it here for what it's worth in case it helps to solve your issue.

Do you let the glow plug light go out before you start the car?
R

I would concur with Paul, but wonder if the revving is caused by the injectors being old / worn rather than them needing just a clean - what mileage are you on? I've got a set that I am betting need a refurb or replacement, but then again the car has done 287k - it does exactly the same as you've described every 20 starts or so without warning - couple of revs to 2000 or so before settling down to a normal idle. The temperature gauge is almost certainly a dodgy sensor - easy fix.
D

My revs are like two distinct blips of the throttle. It starts, jumps momentarily to 2000 immediately drops to idle and immediately jumps to 1500 momentarily and then back to normal idle and runs perfectly after that.

Yes I always let the glow plug light go out before starting when cold. Not so when starting a warm engine.

I did a search on google and found this thread and it describes my fault exactly and a solution so I’m going to try a scan initially and if I have the same fault code will follow the solution.

Now and again the glow plug light on my dash will illuminate for a good 8 – 12 seconds. Whilst doing this if i wait for the light to go out before starting the car it will rev it’s self up violently to 2500 rpm or more for a good few seconds before eventually settling down to idle. Now the...
r.tapatalk.com

Hopefully the link will be there this time.

yes, link is working now thanks.

The white one in my photo sig on the left threw up a fault stating this.

01039 coolant temp sensor (G2)
30-10-Open to short to plus
The car never over revs but is sometime a pig to start from cold, once warm its fine and runs fine all the time.
So the question Im asking is this.
Why would the results be worded different for the same found fault.

Incidentally, my other A2TDI 75 was having exactly the same problem with over revving from start but is now fine after changing the coolant sensor.
D

Hi
I’ve done a scan now and have photographed both things I found. 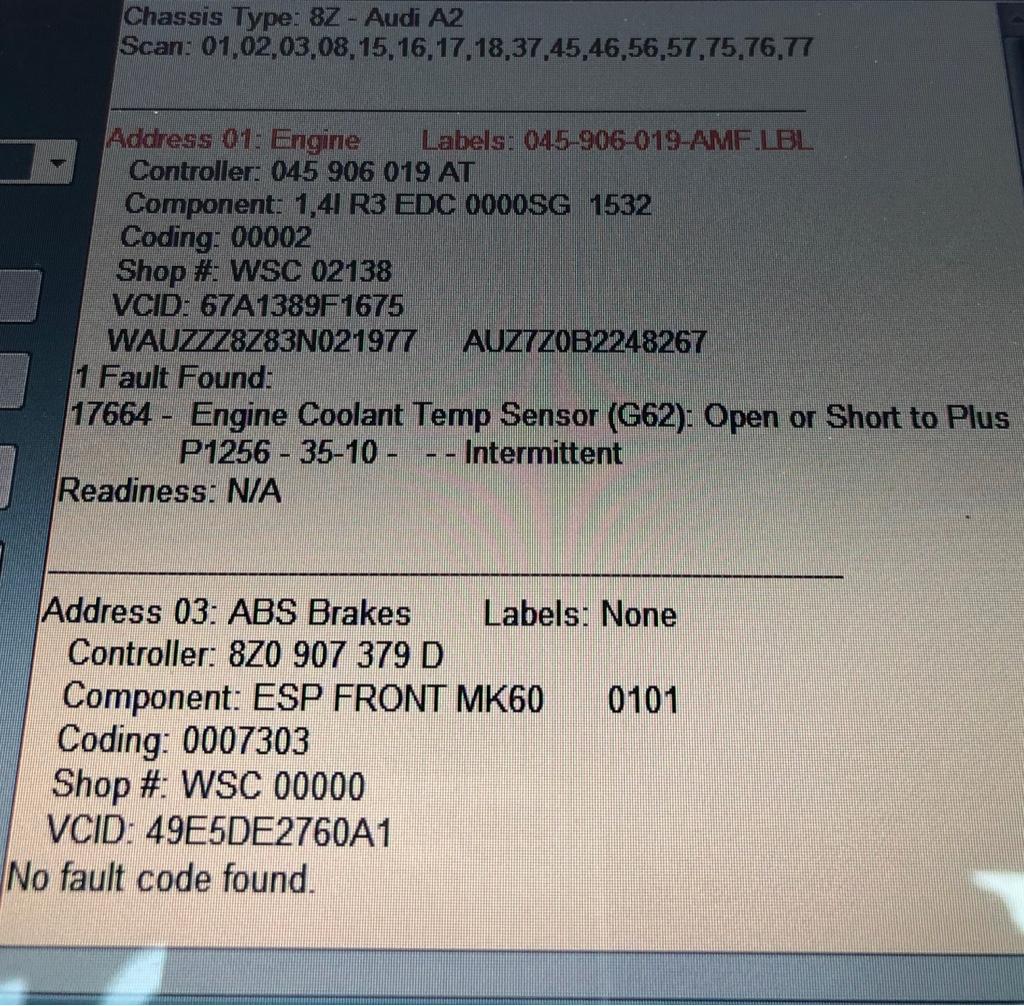 The first scan was on auto scan. It showed a temp sensor fault and I tried to cancel it but it kept coming back up. 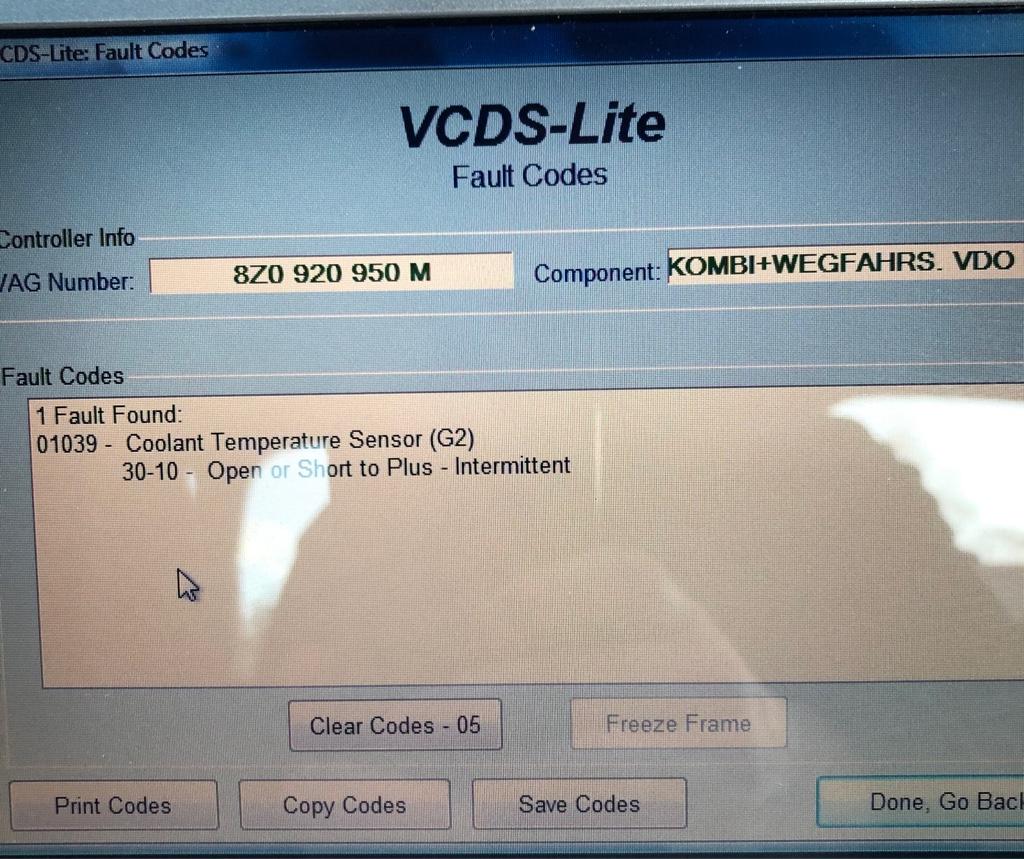 I’m going to change the temperature sensor with a genuine one from TPS as soon as I can and I’ll check the wiring/ plug and socket and once it fitted I’ll check with another scan.

So you got the same as I did with your second scan.
D

johnyfartbox said:
So you got the same as I did with your second scan.
Click to expand...

Yes I did and the first sensor fault kept coming up on the auto scan.
Im hoping that changing the sensor sorts both problems. I’ve definitely got no temp showing on my gauge and I had the erratic revs.