Funny how it goes ... Meet PYXi

FSi from Yorkshire (thread to come) 580 mile round trip.

The Devon car: bought from South Devon, 530 round trip.

Lasi, the first A2 (and that was only a few months ago amazingly): 9 mile round trip.

Well, this post can only go one of two ways: have I just returned to Sussex from Aberdeen? Lands End perhaps? Nope, under 1/2 a mile from me. Took just over two hours to view the car, go and get the truck-n-trailer, collect the car, drop it at the house, take truck-n-trailer back to workshop and get home again. Poor dog was most confused, she was expecting ten hours in the truck at least. I fear unless someone leaves an A2 in my garden, the short distance record is going to stand for quite a while.

Anyway: was on eBay for £565. Broadly as follows: A2 FSi 2002, no MOT, alternator light up, EML up and going into limp mode, been standing since Christmas. Was filthy in the pictures with green slime around the windows / trims. Hedge in background was bare: no leaves. No bids (again). The ad suggested he was in Heathfield, five miles away. I touched base and it turned out he was down a long track off the lane 1/3rd mile behind my house. I was (and still am) looking for a TDi75 to replace the Devon car that unexpectedly sold last weekend, but it would have been rude not to take a look at this.

A bare SE other than parking sensors oddly: if I was going to tick just one box on the options list it wouldn't be that. Anyway, they didn't help: there's a ding in the bumper.

The bad: filthy but cleaner than in the ad. Brake light up. EML as above. Alternator light (ditto), no power steering (I'm gambling on low voltage). Gravel on top of engine (I kid you not: pics to follow). Disgusting underneath: caked in mud, rusty. Yuck.

The good: Actually it sort of does have an MOT by virtue of the six month CV19 MOT extension. Recent battery, recent service (apparently) Full service history religiously every 10K or less, all but three being Audi. Engine literally looks like new inside. A/C works. Full tool-kit, compressor, load cover, two keys (working), hand-pack, false floor present. Not battered inside or out and actually looks like it'll come up very well: one external dent, some odd scratches and some sun-cream burns which hopefully will mop out.

Here she is: meet PYXi, mine for £250 with guarantee she won't be broken and the previous owners get first dibs later if I sell (apols for the pic, it all happned so quickly I didn't have time to get a proper camera and then it looks like I had a thumb in the way as well ): 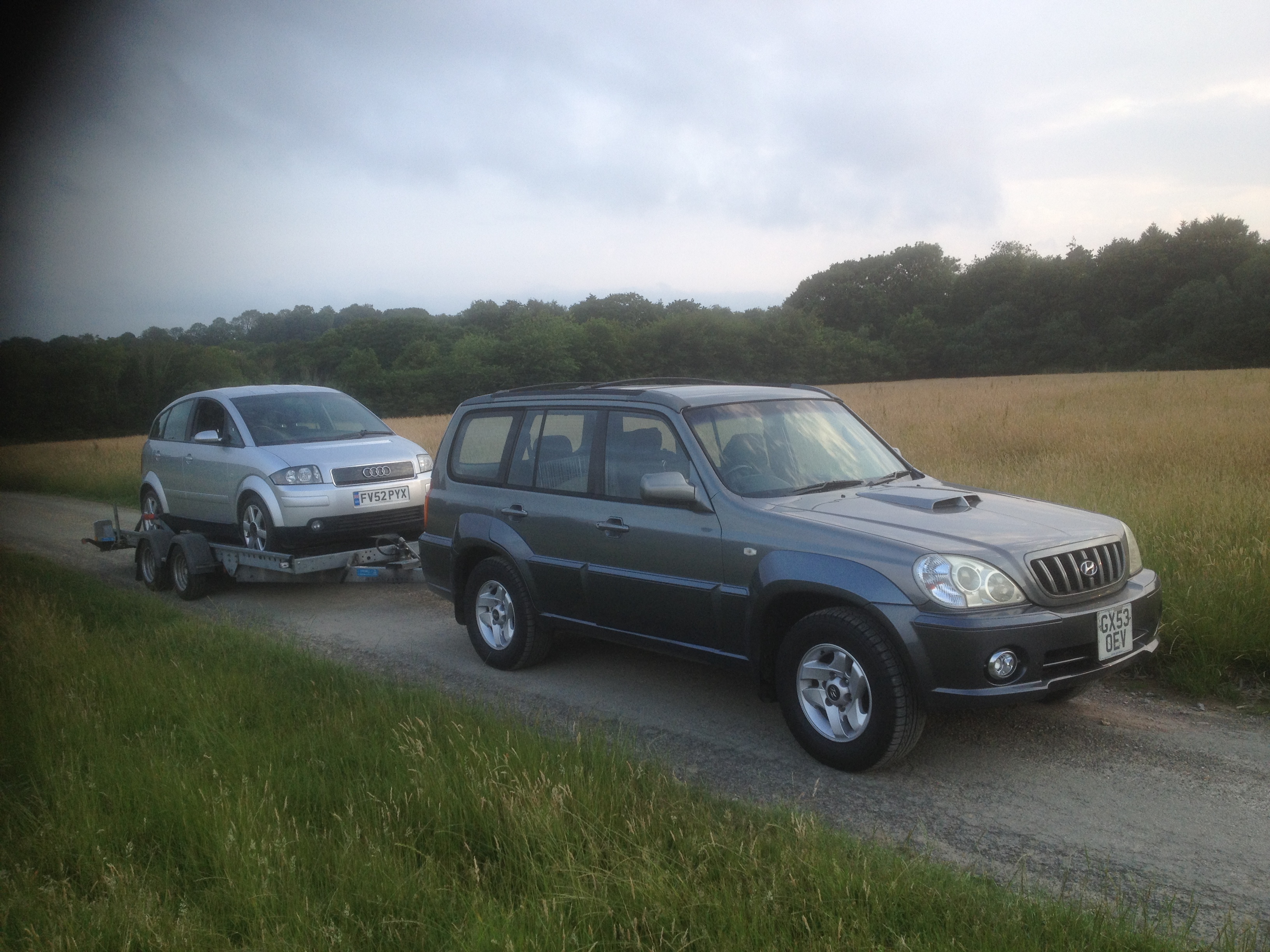 Well bought, at that price and with it being so close to where you live it’s a no-brainer- plus with your skills and recent experience I’m sure you’ll have it up to spec in no time!

What’s the plan for this one? Clean up and see how you get on with it or turn-around for sale? And is a Proboost ECU on the cards once you’ve gone right through the potential EML causes?

Time for a group photo soon of your A2 collection?
A

Got to disagree on on rear parking sensors, would be my number one upgrade, would not like to live without them. Actually parking sensors is the only upgrade at birth on mine, so that at least three owners like minded.

Keep up the good work.

dj_efk said:
Well bought, at that price and with it being so close to where you live it’s a no-brainer- plus with your skills and recent experience I’m sure you’ll have it up to spec in no time!

What’s the plan for this one? Clean up and see how you get on with it or turn-around for sale? And is a Proboost ECU on the cards once you’ve gone right through the potential EML causes?
Click to expand...

I think that was my thought: it was nearly free and was here in a jiffy. Since the whole operation took about 125 minutes I didn't really think about what the plan was. I don't do any cars with a view to selling really as it would never pay. My workshop rate on the 911's is £45-75 per hour depending on the job. I think the Devon car cleared about £700-750 so that works out nearer £7 per hour, literally. So, no, the quest is to find an A2 that fits me, and if that means leaving some better than I found them, perhaps self financing them and have some fun along the way, that's fine!

I've not driven Yorkshire yet, but PYXi does drive: mechanically very well, but a host of issues: ABS / ESP lights up, not charging, EML (of course), suspension is clonking at rear (no wonder, when I visited it, I ended up using low ratio in the truck, the drive was that bad). Gearshift nearly seized, no power, hesitating, surging and so on: all the goodness you expect from a multi-owner problem child FSI.

I think I'll free off the brakes on Yorkshire, take that for a run as well as see which has most potential. Move all the best bits onto that car and try to make one that drives really nicely. That'll be mine and then I'll try to give the other one the best chance possible.

I've not looked, but hopefully somewhere on here will be some sort of FSI flowchart to work through to get them running correctly. PYXi is clearly not a happy bunny. I'd be absolutely amazed if the half tank of fuel is 98RON, much more likely it's 95 from late 2019 (as was standing for a while). So that's one thing straight away.

One thing I did notice though was the lack of the OSS compared to the Devon car: yes it's darker inside (black interior, Yorkshire's is the beige: much brighter), but you can definitely feel the lack of weight up there. For me that's a good trade although I did come to like the OSS in the end I have to admit.

Will do some research and try VCDS on it: I have a feeling it might need a bit of a lie-down half way through ...

Joga said:
Time for a group photo soon of your A2 collection?
Click to expand...

Currently it's only a collection of two, although LASi is still at the farm as the trader I sold it to stores cars there. It's a good point though, I ought to get a pic of all three silver ones together. In fact, the chap that bought the Devon car might be popping in (from Essex) to collect a full-sized spare I've given him, so we might be able to organise all four then. To think, a few months ago I'd never owned an A2 or heard of A2OC either. Had no idea how dangerous the whole A2 thing was

I’d noticed the trader is still advertising LASi, it seems he is having trouble shifting it doesn’t he?

Lookimg forward to reading you bringing this one back from the depths of an absolute horror show of a VCDS scan from the sounds of it!

dj_efk said:
I’d noticed the trader is still advertising LASi, it seems he is having trouble shifting it doesn’t he?

Lookimg forward to reading you bringing this one back from the depths of an absolute horror show of a VCDS scan from the sounds of it!
Click to expand...

I think it's actually going to his sister at some point which would actually be a good outcome all round: she'll potter around in it locally and it'll probably go on forever like that.

And yes, being new to full VCDS I have a feeling I'm about to get a big dollop of experience, whether I like it or not

Andrew said:
Got to disagree on on rear parking sensors, would be my number one upgrade, would not like to live without them. Actually parking sensors is the only upgrade at birth on mine, so that at least three owners like minded.

Keep up the good work.

Ahh, but I'm a country yokel. The only thing I could possibly reverse into around here is a cow, and they usually move (moo've) out of the way.

You know what's going to happen next: I'll be on here asking for a rear bumper due to a little mishap ...

Pro-Boost ordered: not sure which car it'll end up on yet (if either) but it's clearly a useful thing to have at this point.

I've just asked Steve if he has a spare FSI ECU as I'd rather pay for the surcharge or buy an extra one to send in. I made the point that currently the Pro-Boost is around 100% of the price paid on each of these two cars, which is a reflection of price paid for the cars rather than the remap naturally.

Anyway, to have the facility to retain the Pro-Boost should they not work out would be useful / prudent.

I'll not put an official 'Wanted' up yet for this, but it looks as though I'm going to need an exhaust system: it's pretty nasty and I think I can hear a blow, whereas the rest of the car looks quite good underneath now cleaned up. Miles better than the Devon car started off anyway.

Steve might have some of a system, but thought I'd mention it here just in case someone's got one or going to be breaking a car. I've also put a Wanted up for a couple of hub-caps as well.

Someone on the plethora of Facebook groups will be breaking a FSI for sure if no luck from members here.