This all started about 3 years ago when I found my OSS to be none working, the motor was making a loud clicking noise and panels not moving.
On removal and striping down the OSS I found a number of issues, broadly summarised into a defective motor mount and broken cable to truck connections
The 'cable to truck' connections where replaced by homemade fabricated part made from brass sheet and have proven to work very well and are still perfectly working some 3 years later.
The motor mount, well where to start on this part !!! firstly it is rather elegant design, but so so poorly executed.
The fact that it is made from die cast aluminium, which being honest is suitable for making toy cars and not a lot else, then its made in two pieces, that if allowed to separate is a major disaster for the motor to cable mesh, then to cap it all the two halves are riveted together using pins moulded on one side of the mount out of the die cast aluminium and then press formed into rivet heads
To sum up the motor mount in a few words its a piece of junk

It can be made better by drilling out the rivets and replacing with something more substantial, but long terms the die cast aluminium is just far to soft

However it is quite a difficult part to remanufacture as it was designed around the die casting process, this alone was not going to stop me designing a replacement part that would be manufactured from much stronger aluminium plate and be CNC machined for accuracy.
My design was to flip the original design around, I still needed to make it in two halves, but my design is a top and bottom as against a left and right handed parts.
The top and bottom are fastened together using 5 counter sunk screw, plus the two motor attaching screws. What this means is the two halves once bolted togther are absolutely secure and will act as if made from a solid aluminium block. Being honest I may well have over engineered the mount, but better that way than under engineered.

It's easy to assemble the two halves onto the cable tubes as everything is assembled into the bottom half and aligned, then the top half is fitted over the top of the bottom half/cable tubes and secured with the five counter sink headed screws which ensure perfect alignment of the two halves.
This motor mount / tube assembly is then fitted to the front glass panel of the OSS, threading the cables into the guide tubes, finally fit the motor to the motor mount and secure with the two M5 torx screws and a third M5 screw secures the lug on the motor mount to the underside of the OSS glass panel, all as per the original motor mount.
Everything fits as per the original mount using the same fastenings, no modifications are needed to either the tubes or the OSS glass panel
The operation of the motor is now so positive to the cables, I have tested the motor to pull a 50kg force, the motor stalls before the 50kg is reached but there is no hint of the cables slipping on the motor pinion only the motor stalling. A similar test on the original motor mount was initiating cable slip are around 15kg to18kg force

I am delighted with the way the mount as turned out

I used a probe on my CNC milling machine to measure the critical dimensions of the original motor mount AKA a cheap Co-Ordinate Measuring Machine
This allowed an accurate CAD (computer aided design) model to be produced which was then put through a CAM (computer aided manufacture) program to generate a CNC Gcode file, or more accurately a set of Gcode files for the inside and outside of the top and bottom halves. In total there were actually around 13,000 lines of Gcode to machine the top and bottom halves
Below are some pictures of the mount 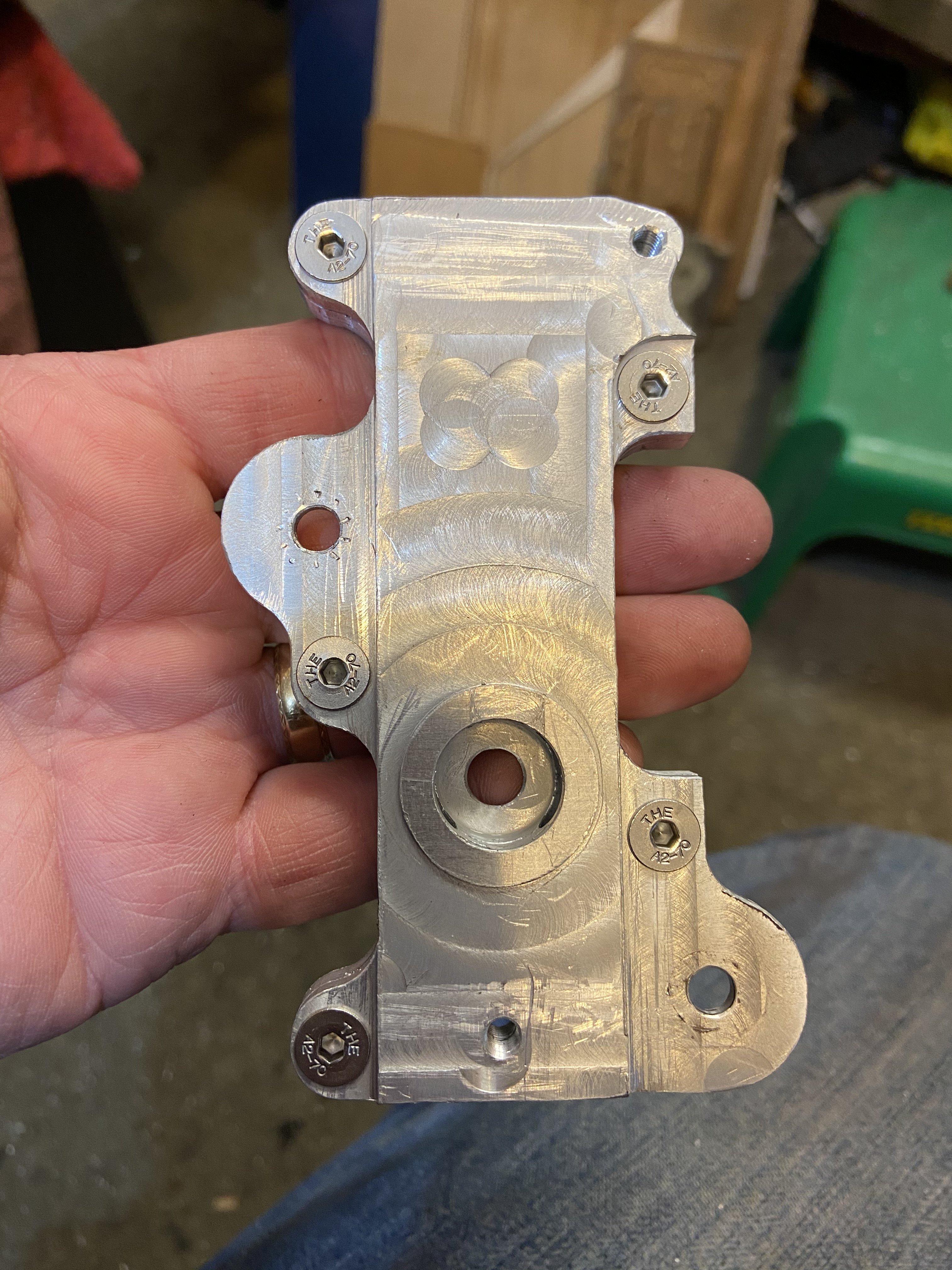 Top half of mount 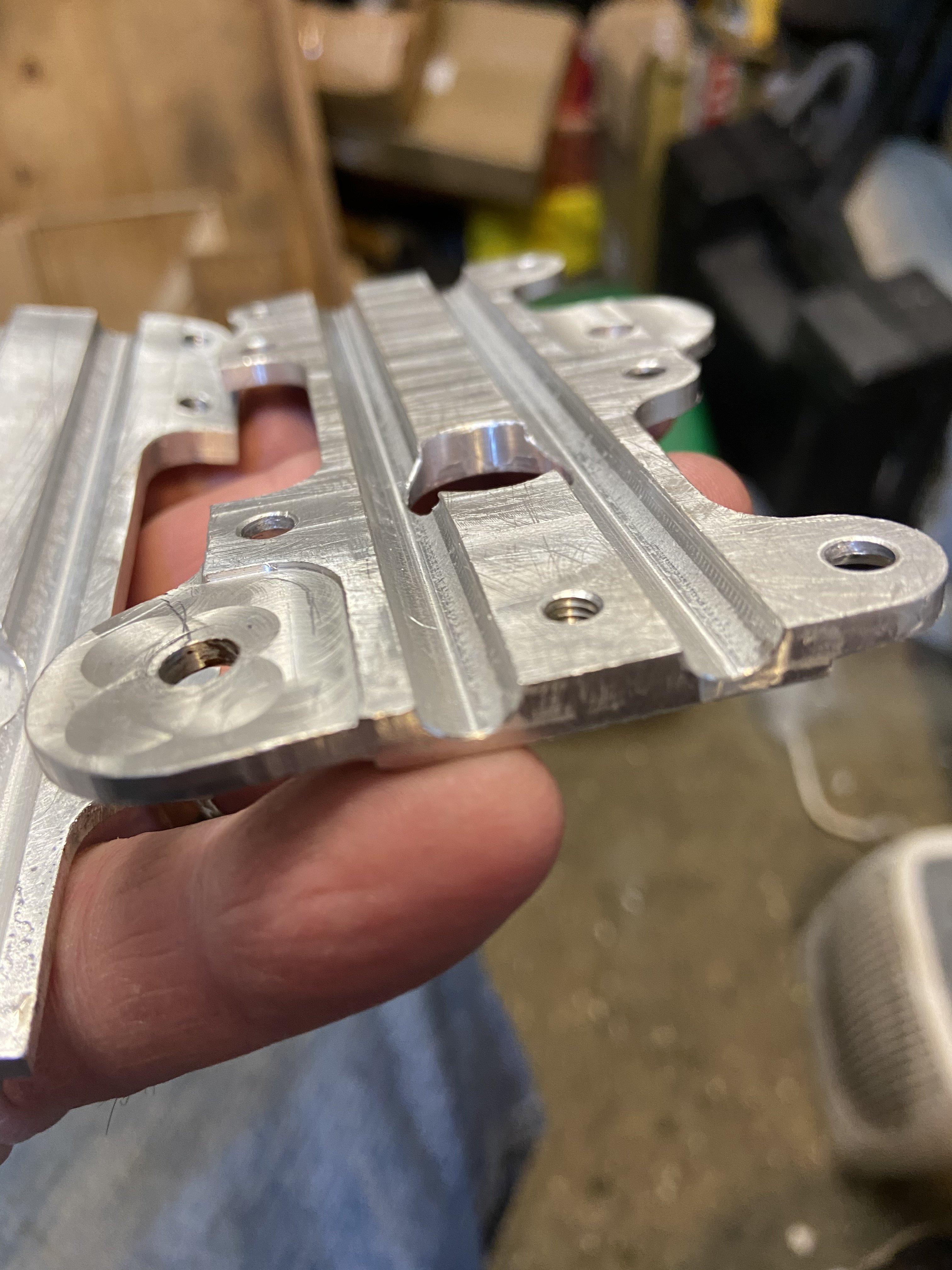 End view of mount showing where the cable guide tubes fit - the two halves of the 7mm Diameter hole are machined seperately using a ball nose end mill, the difficult bit is getting the top and bottom halves to allign perfectly on the 7mm holes and the 17mm bore for the motor This is superb. Well done, Paul. Let’s hope this forever puts an end to one of OpenSky’s greatest weaknesses. Sign me up.

here are the rest of the pictures, showing the final assemble attached to the OSS panel Old and then new motor mount top and bottom halves of the new motor mount I would consider manufacturing these for members, but there is a lot of machining time and two pieces of aluminium plate involved and therefore they will not be costing pennies. I still need to work out the cost to manufacture as the first one made involved a lot of tweakes to the Gcode and the second one made still needed some slight adjustments and therefore I do not have representative machine times.
I intend to make another one at the weekend and will hopefully have no changes to make now to the Gcode and as such I can get representative times.

It will be cheaper if a production run is done as its quicker to make say 5 tops, then 5 bottomes, than to make them one at a time as there is only one machine set up per set

If you are interested in one of these then please post on this thread, no commitment at this time just showing your potential interest, this will give me an idea of numbers for a batch and therefore a price.
Simple scenario is the larger the run the cheaper will be the price

depronman said:
Thanks for kicking this off Tom,
Number 1 for Tom @timmus
Click to expand...

Can I join in please. I have no issues (yet) but it’s nice to be prepared for the inevitable!

That’s a beautiful thing! It’ll be a shame to hide it under the headlining. Interest expressed x 1.

Can I join in please. My OSS has been broken for 3 years and has the same symptoms as the ones you describe.

Thanks for your interest guys, post updated.
I do agree it’s a great pity a think of such beauty will be hidden behind the head lining.
Maybe @Pinkythelabrat will buy one as a ‘piece of art’ to go with the machined aluminium drain screw

I believe my OSS has this issue (we discussed the symptoms last year) - a few seconds of winding and clicking before movement, although a lot of that would also be down to the need for a proper service and lubrication. Will definitely be interested in getting this resolved during '21 assuming we're allowed to - please add me to the list.

Great work Paul it almost makes me want go out and buy an A2 with OSS. And if one comes along for the right price I won't dismiss it out of hand.
John.

thejohn said:
Great work Paul it almost makes me want go out and buy an A2 with OSS. And if one comes along for the right price I won't dismiss it out of hand.
John.
Click to expand...

I love my oss as it lets in so much light and makes the cabin feel so much nicer
I am an open top motoring man Over the years I’ve had a TR7 drop head, triumph Stag, Ford Focus CC3 and now an Audi A5 Cab so it’s fair to say I like the openness of no roof. The oss comes close to the feeling but not quite enough for me to only have the A2 oss
I honestly don’t think that I would buy an A2 without oss, I have had both and the oss just does it for me
I know it adds weight in all the wrong places and is a fittle beast at times, but it looks so sleek and lets in so much light even when closed that I forgive its shortcomings

Put me down as interested too please as mine doesn't work and sounds like a duck clacking when you press to open. It doesn't open either by the way!

Amazing work Paul. Put my name down too please!
W

Nice work Paul, My A2 with the OSS is my keeper, so please count me in. Many thanks Nod

Do we give out awards for innovation?
R

Great work, mines is working perfect but I would do this upgrade to keep it that way, could you put me down for one of your great pieces of work.

Could a moderator perhaps reverse the order of my first post and Paul's second post? I feel that the flow of Paul's introductory posts is somewhat interrupted by my premature response. Once done, this post can also be deleted. Please and thank you.

@depronman this is awesome - skilled engineering know how and a great contribution to the A2 community. Great work.

Still don't want an OSS A2 give me claustrophobic any day

@depronman Wow, Superb work, Yes, Interested, please put me down for one.