Any thoughts appreciated as would any advice on the best way of removing to avoid any damage to paint.

I've (still!) never seen even a picture of one with a Special Edition badge let alone in the flesh. I'd imagine someone has had it made up.

If it's just a sticker then warming with a hairdryer should do the trick. If it's solid and attached with double-sided foam tape (like the 1.4TDI badging) it should pull off, probably leaving half the foam tape behind. Rubbing alcohol (IPA) will get off all residues. If it's solid and appears glued, IPA is where I'd start to try and dissolve it.

Is the photo on a micro-dot? No can see!

Generally to remove badges, get a bit of fishing line behind the badge and saw through the foam / glue.

Soak the remainder in WD40 for a while and you should be able to gently scrape away the glue residue. For really stubborn badges / vinyl / stripes you can buy plastic razor blades that won't hurt the paint assume you keep any grit away, but will remove most deposits.

Use a compound or a polish that also cuts paint (Autoglym Super Resin for example) to remove any hazing.

If you're fitting a new badge in that area do all of the above but then use a little bit of panel wipe / alcohol / carb cleaner to dewax before applying new badge.

I've (still!) never seen even a picture of one with a Special Edition badge let alone in the flesh. I'd imagine someone has had it made up.

If it's just a sticker then warming with a hairdryer should do the trick. If it's solid and attached with double-sided foam tape (like the 1.4TDI badging) it should pull off, probably leaving half the foam tape behind. Rubbing alcohol (IPA) will get off all residues. If it's solid and appears glued, IPA is where I'd start to try and dissolve it.
Click to expand...

Thank you both for replying and for your really useful advice. Sorry about the photo missing. My bad - I’ll get my coat. Will try and attach. 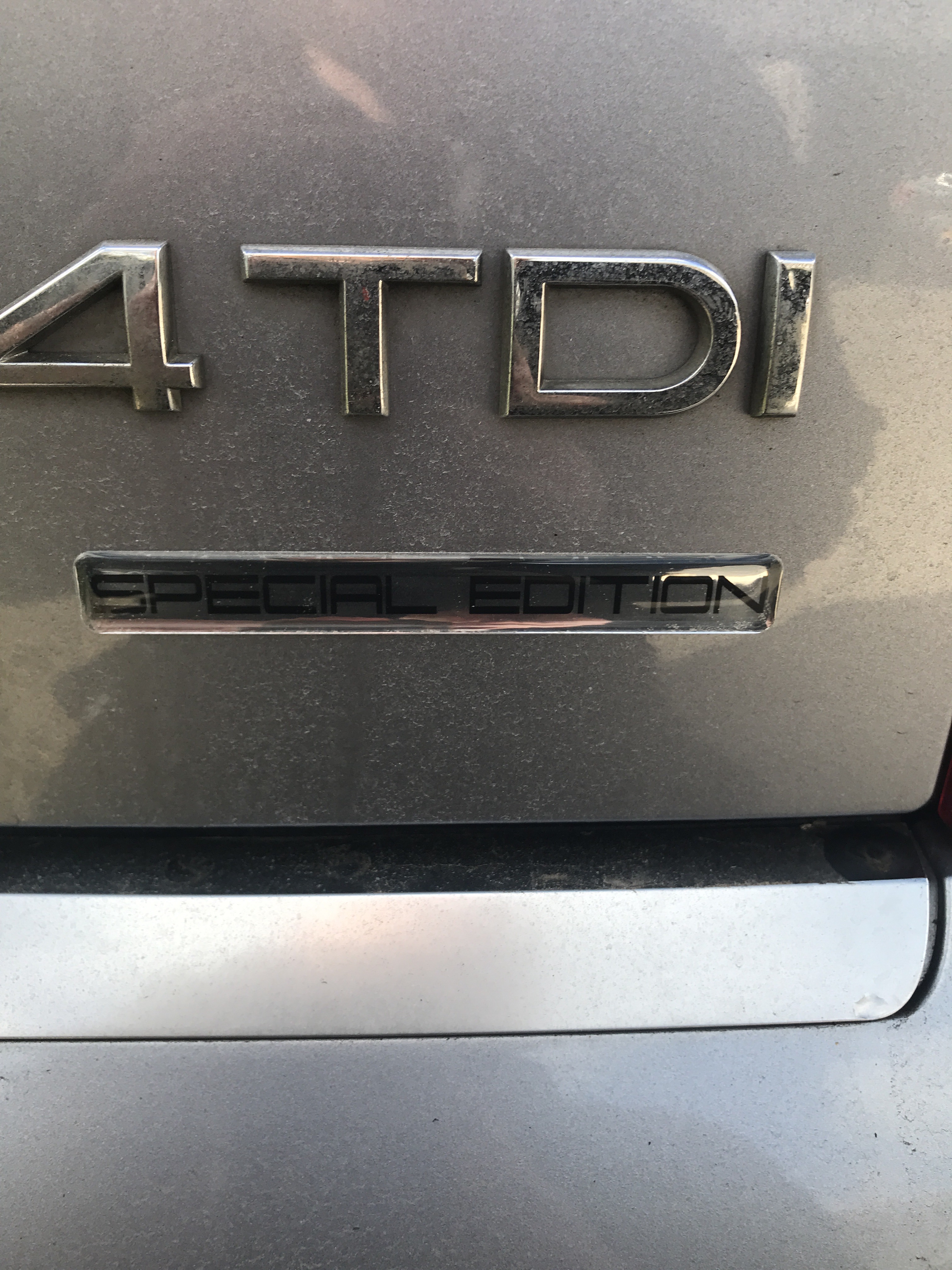 Sent from my iPhone using Tapatalk

To be fair, that's not as bad as I imagined.

Can confirm my Special Edition has no evidence of any previous/ current Sp Ed badging.

Never seen one of those before. Not badly done, just out of place/not required. Hope it plays nicely coming off.

That is a generic badge that can be bought from the likes of Amazon and eBay.

For something like that, a bit of heat with a hairdryer and either a trim removal tool or fingers should pull that off easily enough. Then follow up with removing the residue and polishing as advised by others.

To remove these sort of things in the past I’ve used minimal WD40 to release the adhesive and pulled sewing thread underneath it.

Simply pull the thread continuously in both directions as to saw through.

Great for removing the metal plate on phone/phone covers also when you send your phone in for recycling.

One thing I would add is if you do lever a badge off with a trim tool (heated or not), pop a bit of card or whatever under the gap between badge and paint on the opposite side. In the past I've put a tiny dent in the lacquer as the badge rocks away from the lever on the fixing foam.

Looks ok to me, i'd say it's no different to folks adding the s-line badges even though we didn't get the s-line in this country, all down to personal preference really. The above answers give you everything you need to remove it, if it were me i'd keep it on but that's me.
T

The replies were extremely helpful. In the end the sticker gave up with little resistance and hasn’t left any residue on the paint.

Tom said:
The replies were extremely helpful. In the end the sticker gave up with little resistance and hasn’t left any residue on the paint.

Probably one of these?

There isn't oem SE badge for A2 unfortunately.
S

Jellybean said:
Probably one of these?

Sent from my SM-N960F using Tapatalk
Click to expand...

Yes I've seen them too. Not bad for the price to be fair.

At the risk of alienating a forum that I have only just joined and will likely still need significant advice and help from, surely it is better not to add badges that were not intended to be there from the factory, but to leave things plain and OEM? After all, we are talking about a sedate and stylish Audi, not a loud-exhaust, fake-turbo popping ricer driven by a spotty youth.

When I bought my new A5, I think Audi were going through a bit of a de-badging phase and I was disappointed that mine did not say 3.0L quattro on the back, just TDi. How was I supposed to let the 2.0 TDi owners know that they were in the presence of a more expensive and powerful car with a much higher spec? But soon I came to realise that my car attracting less attention was only a good thing for so many reasons and so smug mode set in. Sure I could show them the power if needed, but better to take out out of sport and flappy paddle mode, set the radar cruise control to comform and queue up the next track on the banging B&O stereo for chill mode.

Another example: My S2 has all of the engine and interior parts from an RS2, but it is an S2, not an RS2. Therefore an A2 with however many upgrades is not an S2 (I have seen them with S2 quattro badges in the past) and if they did not leave Neckarsulm with an S-Line or Special Edition badge, why feel the need to add one.

IMHO and before I get roasted, it is always better to be the wolf in sheep's clothing (whether in terms of power or spec or class) rather than shouting about it from the hill tops as there is always something bigger, better or faster just around the corner. Much better to put it in 5th, or 6th, 7th or 8th if you have it, sit back and smile smugly to yourself that you not only own it, but know just how good it is and that the other guy is unconsciously incompetent - i.e. he is blissfully unaware of what he doesn't know and is therefore missing out on.

I do this every day that my car mad neighbour refers to my 392BHP Audi S2 as "that old Audi 80 of yours" as he boasts about how fast his MG is now or how grippy the new tires are....makes me feel SO smug that Kryten's + Clarkson's smug modes combined just aren't enough!

Cheers n fears (for the roasting)
Simon - I'll get my coat

P.S. Having written this, I realised that I own cars with 4, 5, 6, 7 & 8 gears, (of the two 4-speeds, one has OD on 2 gears and one has OD on 3 gears, one column OD and one on the gear stick). In other words, every car I own has a different number of gears changed in a different way. I guess that's 50 years of development for you but no wonder my 17 year old son is confused about gear changing in all of dad's cars!
Last edited: 18 Apr 2021
You must log in or register to reply here.
Share:
Facebook Twitter Reddit Pinterest Tumblr WhatsApp Email Share Link
Top