Is there anything need to know about TDI 90 ?

DMF can be a pain to change.
O

Both have the same mpg, but TDI90 is a totally different driving experience. Its like a rocket compared to the petrol. It is as fast as a 2.0TDI170. But also much much more engine noise.

OK But what is DMF please ?
A

Usually very nice cars. Disc brakes all round, variable vane turbo, dmf and a few other little things. If it has good history drive it you will love it. like being driven hard although as pointed out are diesel therefore a bit noisy bit in a "sporty" way.

certainly the most complex of the three TDI engines and therefore the most to go wrong. The Variable vain turbo and dual mass flywheel are the main extra things that are likely to give trouble.
The DMF wears out similiar to a clutch and needs replacing normally before the clutch would, you do the clutch at the same time as you are already in the right place (gearbox off)
The VVT tends to stick, drive it hard once in a wile will generally keep this issue at bay
rear disk brakes are a pain as they do so little breaking they seize up, drums are much more reliable

Yep this is the result of her rear brakes not working properly. Car rolled down a hill and crashed into a wall. Result one way trip on a low loader. It was written off. 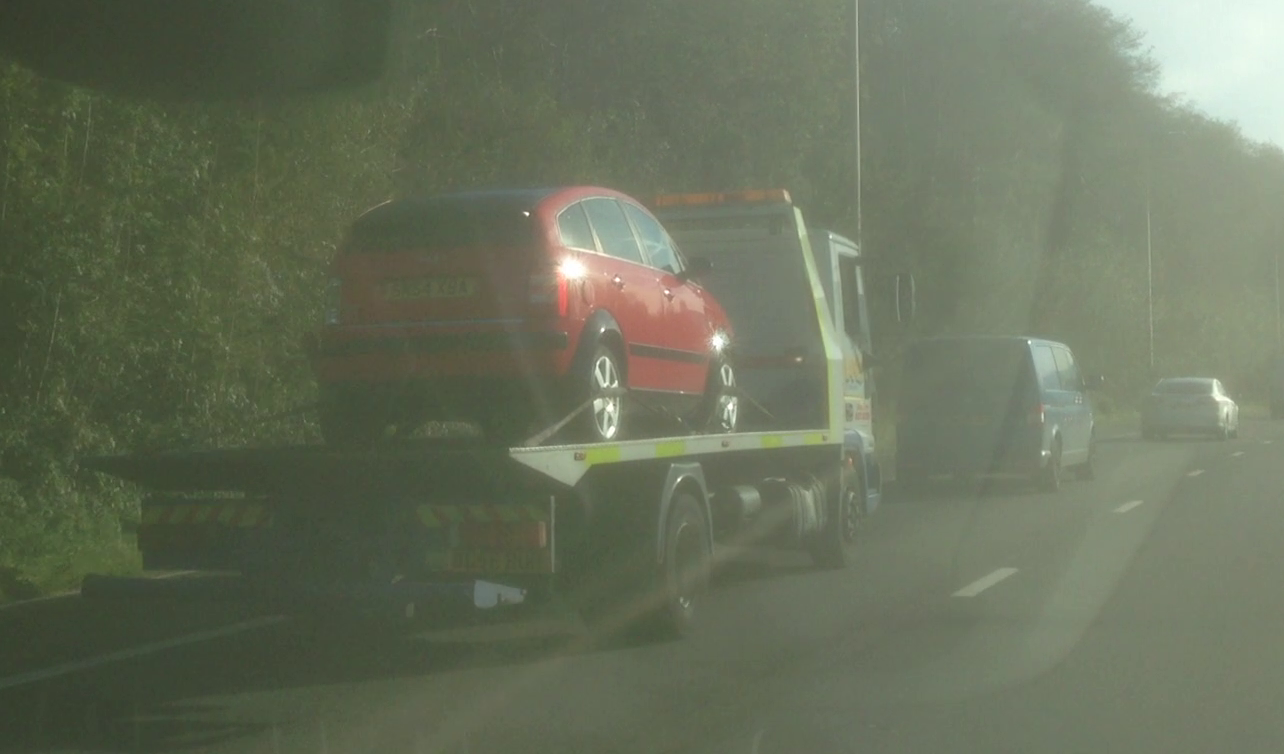 I was away at the time so didn't get it back from the insurance.
O

About rear discs, DMF and turbo; if you want to drive the car for a long time, these need replacement. But the same applies to TDI75 as well.

For me it does not matter if you replace the parts at eg 130kmiles (TDI90) or 180kmiles (TDI75) as you will only do it once during cars lifetime in any case. Eg my TDI90 is 15 years old at 115kmiles, still on factory DMF, turbo etc. And still going. If I need to replace something, I can then drive another 15-20 years and further 120+kmiles. That is more than sufficient to consider the car as totally wornout, but it is also unlikely that I will drive that car another 15-20 years and the public society will accept that old diesel around.
O

audifan said:
Yep this is the result of her rear brakes not working properly. Car rolled down a hill and crashed into a wall. Result one way trip on a low loader. It was written off.

I was away at the time so didn't get it back from the insurance.
Click to expand...

Was the car running in neutral?

Olerype said:
Was the car running in neutral?
Click to expand...

Parked in neutral, I would think.

RAB said:
Parked in neutral, I would think.

Why park in neutral..(?). Remind me about SAAB where you need to put gearshifter in reverse in order to pull the ignitionkey. Have someone experienced how much inclination it takes before the motor is pushed to rotate? Or if inclination can force the car out of gear?

From my own Personal experience and I’ve had two TDI 90s I would stay well clear I’ve had one problem after another why not buy a BHC or AMF TDI 75 bhp have them mapped you then have the best of both worlds...and none of the probs mentioned

Probably because I know nothing about any Diesel A2. Only ever had our 1.4SE Petrol, for the last 15 years.

All advice is appreciated. Thank you.

However, a series of anecdotes may be interesting but not actually helpful in understanding whether one model is better or worse than another. I'm sure there are horror stories and paeans of praise of any model that, taken on their own, don't add a lot to the sum of human knowledge.

What would be good is for someone with a knowledge of databases, for example, to start something that we could record failures of our respective models so that over time a more statistically relevant pool of information could be developed about model reliability and most frequent failure modes. But that ain't me, I'm afraid.

The car was parked and left in gear and hand brake on. She got in put her foot on the clutch and as she was starting the car it rolled backwards into a wall. It all happened in about 2 seconds. Broke her heart as she really loved that tdi 90 5 seater Misano red colour storm and had owned it for 8 years.
O

@Merlin3046 : new DMF and clutch because it was required or just natural part of the gearbox swop?

Away with the fairys

Afternoon , just lobbing my brick in the pond

Each engine has its strong, and weak points

A key consideration , is how is the car to be used , short journeys , and its the 1.4 petrol , longer trips at normal motor way miles the TDI 75 wins hands down

Driving like a loon , and trashing a engine more you thing , then the 1.6 FSI is the winner

Basil , my TDI 90 , which was bought last year , at 171 K miles has been a major pain in the arse , but 15K miles in a year later, things has settled down well , an item which has not been discussed is crankshaft failure, along with the oil pump chain lifespan . The engine rebuild was a nut and bolt job and my brief was for an expected life span exceeding 200K miles

In my case , the crankshaft failing lead to a new short engine , overhaul of the head , rebuild of the VNT turbo , new intercooler , and MYP gear box , so the final bill was eye watering , but spilt this over 10 years , and 200,000 miles , it makes a lot of sense.

For me,the cars intended use ,and its past service history would be leading the way , those cars are now upwards of 15 years old , been subject to lack of servicing ( in most cases) and maintained by " less skilled" people along the way .

Good TDI 90s , come along , but command strong money and normally high mileage , buy with you eyes open ,and your wallet ready ...

You shoul'd know that it is THE engine to have in an A2, it's Heaven on the Devil's fuel!
From low down till high up (for a diesel at least) in the rev's, it's always willing to pull and go forward, especially with a re-map.

An AMF is a nice engine, but no comparisson to an VNT turbo'd ATL........ It's like sisters, there's always one a little naughtier and provocative, and higher maintenance is included with it , but you know what you like.
I drive an AMF now....... and miss my (rip) ATL (although I'm getting used to have the sensible sister now......)
O