Hello! I recently joined the forum after lurking around for some weeks, it seems like you guys are a great community
I recently bought a 02' 1.4 petrol for my girlfriend which she plans to commute with when summer comes. Got the car quite cheap since the mileage is high and it has some issues.

The main issue is the rough idle where it bounces anywhere between 600-1000 rpm. It behaves nicely once I start driving it, but vibrates a lot at traffic lights and intersections when I have to stop. The low oil pressure warning also comes on intermittently after driving it for a while, but disappears again. It seems this correlates with engine RPM as well, as it does not come on if i drive above 2000 rpm (sufficient speed for the oil pump??) I've been searching around the forums trying to troubleshoot, but am currently on the brink of giving up and buying another A2 (TDI this time) with better service history..... :/ I love the A2-platform with its aluminium space frame and versatility!

List of things I have done:
- Replaced oil pressure switch, camshaft position sensor and knock sensor (^see link below from "A2-freun" with ECU cutting signal because of misfire)
- Cleaned throttle body, MAP sensor and EGR
- Replaced all 4 injectors (matching set since the internal resistance on the old ones varied quite a bit)
- Bought new oil separator (not yet installed), cleaned crank breather hoses
- Flushed engine to remove potential sludge
- New oil and filter

* The diagnostic scan shows error "Injector circuit malfunction" P0201, P0202, P0203, P0204
* I have tried manually forcing throttle adaptation with different guides with disconnecting the battery etc...
* I'm trying to get ahold of a VagCom nearby to force this adaptation
* Have read about camshaft dipping and blocked crankcase ventilation

-> I am running out of ideas and it keeps getting more expensive (hehe, what can you expect from such an old car).
I do however like tinkering and fixing stuff and consider myself fairly mechanically inclined so..... Any suggestions?

Dear German A2 friends, This is my first posting here, as Bret recommended I ask your advice. I have a long ongoing problem with my A2 1.4 petrol. I would be most grateful if you could give me some advice. Below is my last post on the A2OC website on the subject: My Audi A2 has now been with my l...
a2-freun.de
Last edited: Saturday at 10:12 PM

I see from your list you've cleaned the throttle body, after reading other threads on this forum I've gathered the throttle body needs resetting or calibration in some cases, please jump in if anyone can confirm this but it sounds like a possible cause.
R

The erratic idle is both a symptom of a dirty TB (with related muck in / around the EGR etc.) and a cleaned or new one that hasn't been adapted back to the car. It appears from a lot of threads that the urban myth about disconnecting battery for a certain amount of time and / or it resetting after idling for 3 minutes is still widespread. The only way to get a TB to adapt and pass the acceptance criteria is to ensure that the adaptation conditions are met, and then use the appropriate equipment plugged into ODB port. If the TB isn't adapted, even driving is a problem (very wild and jerky with constant throttle input, say an attempt to drive at constant 2000rpm results in you looking like a beginner with a dose of kangaroo petrol).

This doesn't sound quite the same - the variable idle issues suggest that the baseline 'choke' is stuck in some kind of feedback loop. I'm wondering about things like the air mixture being out of spec because of leaks or perceived leaks so the engine is hunting around messing with the mixture automatically to try to get back within % air-fuel mixture which again badly affects driveability if it is doing the wrong thing.

Two recent suggestions have been fitting new fuel cap (to ensure sealing of the fuel vapour circuit) and the oil filling cap on top of the engine - is there any oily residue on the rocker cover around the oil cap? This sometimes can contribute to 'intake manifold pressure sensor implausible value, sporadic' errors.

Coil / sparks / wires not being good you would see constant misfiring on one or more cylinders with these eventually shutting down as they exceed count values - if the coil and related parts are new and genuine then this shouldn't be a big issue.

Finally - I've not seen mention of lambda probe - these get damaged by fuel being sent through the exhaust, and if this is malfunctioning it could also impact on mixture considerably.

The injector circuit issue doesn't sound great either - as it is all four cylinders, this suggests perhaps something upstream of the injectors themselves (one of the timing sensors - is there a new crankshaft position sensor, because I can't see it mentioned above unlike camshaft etc.?)
Last edited: 7 Apr 2021
R

Hello, this is my first post as a new A2 owner. I have just bought a white 2002 1.4 petrol as a first car for my wife but have yet to collect the car for the following reason. When I went to see the car, the owner informed me that the engine warning light had just come on the day before. I drove...
a2oc.net

The above is quite a comprehensive thread on a similar topic just in case there are any further ideas of things to try. How are the injectors earthed? I've read that unlike some of the other 'bad earth' issues with the car, the injectors have a constant 12V supply but the ECU decides *when* to earth them back to the car, so if the ECU has a bad earth connection all four injectors would conceivably not be getting a clean current flow. With all of the usual 'intermittent' / 'sporadic' things we can encounter with AUAs as well. I cleaned the main starter motor / engine earth behind the passenger-side headlight of our AUA car relatively recently and that appears to have solved some of the minor running quirks of this car.

Finally - what about things like battery condition, voltage when running and so on - a lot of A2s even now still have original VARTA 8Z0-coded batteries (AUAs are easier to start than the diesel engines so seem to last a bit longer as well) and when the voltage on these is getting erratic this can cause all manner of weird and difficult-to-understand electronic problems.

Talking about earths - a whole bunch of ideas I've never thought about previously here that tally with a lot of A2 bad (starter) earth side-effects in terms of unexpected current flows - which may mean that yours is another manifestation of this. 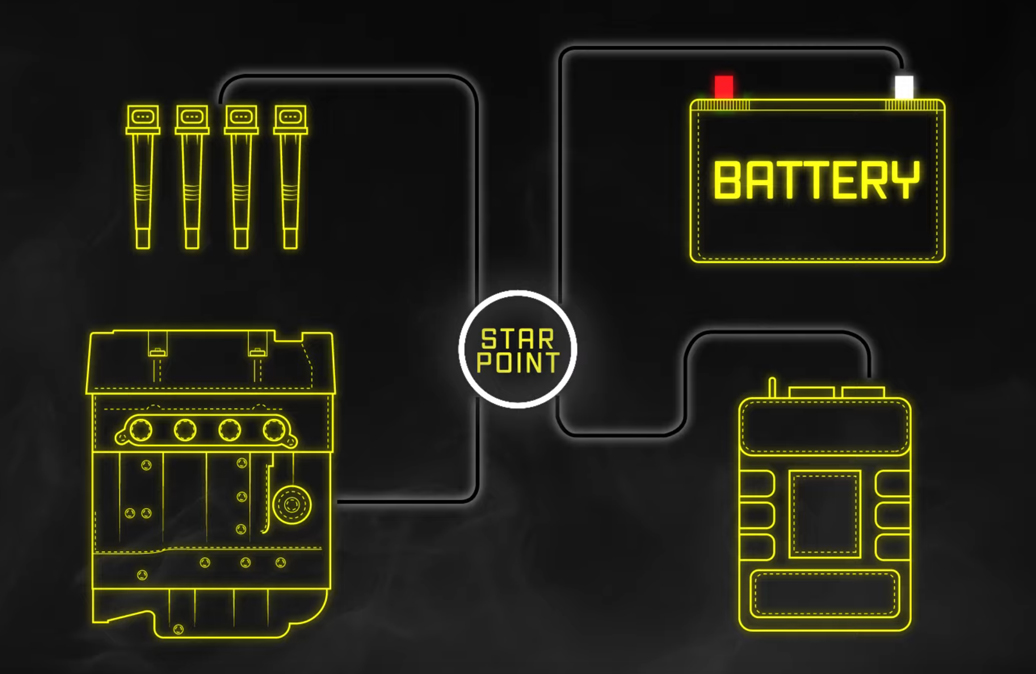 Today we are going to get our nerd on and look at the theory of electronic circuits and help you figure out the optimal grounding solution for your particular wiring application.
www.haltech.com
Last edited: 7 Apr 2021
X

Update... The battery was indeed very old, and have now been replaced by a brand new Varta one. Your hypothesis @Robin_Cox with it causing some of the electrical problems seems to be true as the injector circuit issue error vanished.

I have now also calibrated/adapted the throttle body as recommended with VCDS / VagCom (parametres were met before calibration). The first test ride went very well, but the issue persisted on drive number 2 - it seems as the ECU cuts the signal to one of the cylinders to protect the CAT as described by the thread I linked in the original post. I have read other posts with a sticky valve being the cause of the problem (see picture).

As I was able to rent the VCDS today - I also did a full scan, with no error codes showing up on the engine.

Any inputs or suggestions?

Xzorot said:
Update... The battery was indeed very old, and have now been replaced by a brand new Varta one. Your hypothesis with it causing some of the electrical problems seems to be true as the injector circuit issue error vanished.

I have now also calibrated/adapted the throttle body as recommended with VCDS / VagCom (parametres were met before calibration). The first test ride went very well, but the issue persisted on drive number 2 - it seems as the ECU cuts the signal to one of the cylinders to protect the CAT as described by the thread I linked in the original post. I have read other posts with a sticky valve being the cause of the problem (see picture).

As I was able to rent the VCDS today - I also did a full scan, with no error codes showing up on the engine.

Hopefully that means you got it for an excellent initial price and once you’ve cracked it you’ll be well in credit.
X

Another update! Did a compression test today as I do not trust what the previous owner "says" he did. Read in some other post here that the values for the 1.4 AUA engine should be in between 145-217 psi. I got a significantly higher number, 240 psi (due to carbon buildup maybe, or my cheapo' gauge) However there was little to no deviation between the cylinders

Also checked the charging voltage when idling which is 13.93V... Looked for air leaks, but didn't find anything. As I keep on reading more in the forums I find similarities between my issues and this post as well....

Hi , Don’t have the access to a ramp just trying to find the post cat 02 sensor location on my car found the front pre cat one under the heat shield at the front of the engine but can’t seem to find the 2nd one Could anyone help Many thanks
www.a2oc.net

Sensorwise it is only the lambda and crank angle sensor that I've yet to replace, so I am very tempted to just buy em' and get done with it. Might however be another expensive dead end if that's not the cause... Replacing the fuel filter is also a cheap fix...

Oxygen sensor 1 does not show up??? Fuel economy is naturally craaazy high to due rough idle... Any input?