DJ's adventures in A2 land

Finished off the work on Audrey today - I borrowed my friends DeWalt 18v grinder to cut the nuts of the track rod ends as both of them would not undo without the threads spinning. Luckily the grinder is such a good tool it was easy to make quick progress: Here are the old parts - if you look carefully then you’ll see the MOT failure based on the split rubber boots was fair: 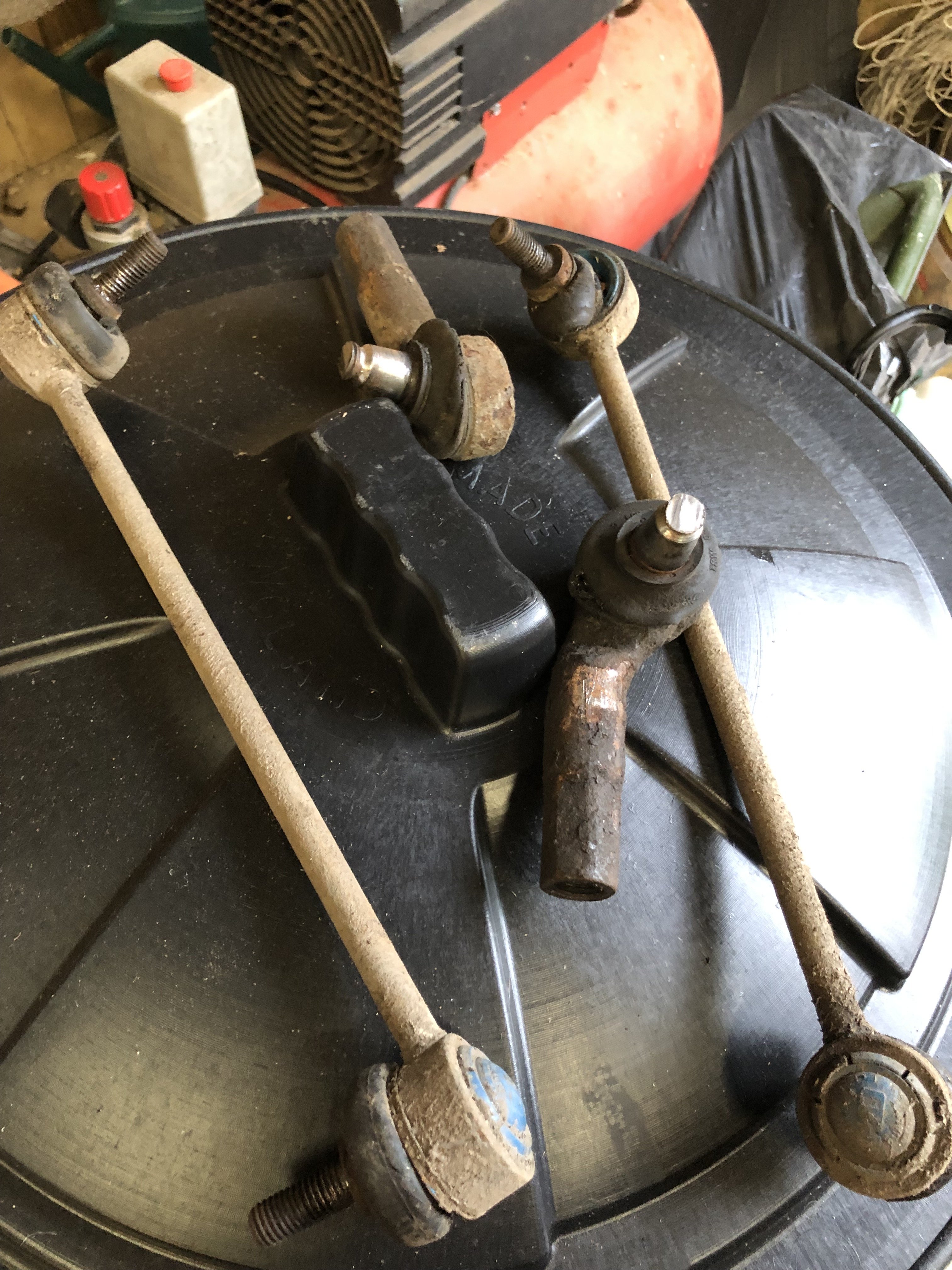 No picture but I pulled out Audrey’s winter wheels & tyres out and fitted them instead of putting the summer tyres back on, even if it’s a little early! My rationale being I probably won’t see the car for a month or two and the temperatures here in early mornings are already getting pretty chilly!

So, ready for the retest and to have the tracking reset and all good.


EDIT: Forgot to mention two elements to finish this job off:

One was what a pleasure the Audi air compressor is to use - Such a great design with the little valve by the gauge to bleed off any excess air - in fact the least favourite aspect of using it is getting to it under the driver's footwell cover, as getting the rubber mats out, the carpet up and the cover off is a bit of a faff I find.

The second was the satisfaction of replacing both LED bulbs in the rear passenger overhead light unit with new, thereby curing the flickering that has plagued it since I acquired the car - such a simple job, I had missed the tiny cutout in the lens that enables you to pull just that off without having to remove the whole unit and dismantle it - which of course is what I did before I noticed and then had to get it all back together again!
Last edited: 27 Oct 2021

Not much to report, Akoya has now settled into being my daily driver and apart from a grumbly wheel bearing (which I am nursing by taking it easy on faster left hand corners - it doesn’t seem to be getting worse), is providing sterling service.

I had the occasion to transport one of my boys the other day, so as I didn’t want to just plonk their isofix seats straight onto the alcantara seat material, it was time to break out the genuine Audi child seat inlay (part number 4L0019819A): 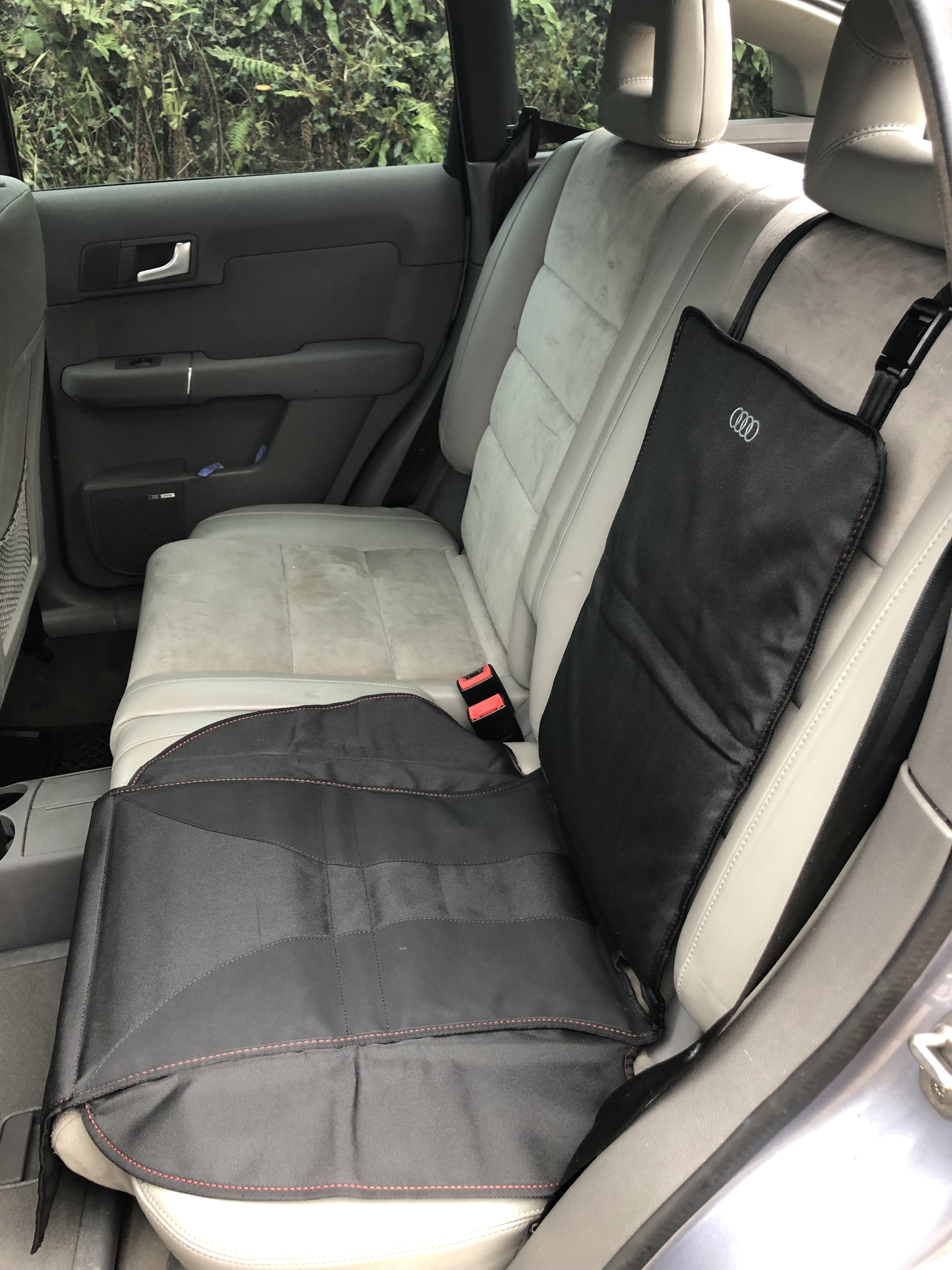 A quirk of the car is the driver’s front window keeps bouncing back down on the one-touch close setting, I had a go at re-training it but it hasn’t really worked.

One little addition I’ve made to the car that I’m pleased with is managing to find a mobile phone holder that doesn’t grip onto the somewhat fragile-looking air vents (previously the only realistic option with my original phone holder as the windscreen is too far away for the phone to mount and be in easy reach and low down / out of the way). This one instead attaches by sucker to the front quarter window in front of the door - meaning it’s nicely within easy reach of my right hand, out of the way of my field of vision and yet leaves enough room with the phone mounted to still be able to see over the top of the phone out of the window when checking the famous A2 windscreen pillar blind spot: It also wirelessly charges which is nice.

I have ordered a longer cable so I can run and fix it down the side of the dash in that gap between the door card, under the rubber mat and under the seat / up to the cig light socket, however the thought did occur to me that a hardwired ignition live would be much better all round. Also the fuse panel is down there isn’t it? What would be the easiest way of doing this?

Akoya got a bit of love today - I took the car to North Devon tyres in Honiton (a town that isn’t in North Devon, but that’s not the point), and had a set of 185/60/15 Michelin CrossClimate 2 tyres fitted to the best of all the pepperpot alloys I’d picked up mostly via Facebook ads for good prices. Excited to have these as I’m a Michelin fan following my experience of the CrossClimate+ fitted to our Touran and the Primacy 4 on Akoya’s chrome summer wheel pepperpots. I didn’t trust a tyre place to jack the car directly so took the wheels there in the boot and then fitted them once home. I’ll report back on how good they are once we’ve had some proper winter weather!

While I was under the car I searched for the source of the mystery clonks I’m hearing from the front right suspension over certain bumps, expecting there to be play in a ball joint or drop link somewhere- however I found nothing amiss - I could not even detect the duff wheel bearing either, despite there definitely being bearing noise on left hand corners. Mysterious!!

What was not mysterious however was the cause of Akoya’s reluctance to turn hard on left hand lock - behold: New steering rack gaiter needed fast - how hard is this to replace? Looks to be a swine for access?!

Also I took the time to give the interior of the car a good hoover and decontamination following a spell being used as a school taxi by my wife while the Touran was out of action recently. Children are grimy!!

I took the opportunity to fit the new boot sill trim that @Clackers supplied me some time back: Also, a satisfying job - I used a longer cable sourced from eBay to route power from the car’s cig lighter socket next to the handbrake to my mobile phone holder above the driver’s side vent more unobtrusively than the previous arrangement (i.e. the cable draped over the top of the steering wheel!!). I managed to hide the cable all the way down to the floor, under the carpet and then up out of sight under the handbrake tray trim until it pops out right where needed at the socket. My OCD is pleased: (@2work Tom could you right the pictures please? Thanks!)

Finally, for the last couple of tanks I’ve been running 250ml of two stroke oil to the Jaso FC semi-synthetic specification as per the thread on this subject. I have to say I’ve noted no additional benefit over running the millers additive, however I will continue until the bottle is empty, then try a couple of tanks of straight regular diesel, then try another tank of two stroke mix to be sure.
Last edited: 30 Nov 2021

dj_efk said:
(@2work Tom could you right the pictures please? Thanks!)
Click to expand...

Done for you Sir.

As noted today in that thread, following my checking the top mount on the driver's side was done up tight, the clonk has not shown itself since - so I'm calling that a free fix (for now) and therefore a double-win!

As a result of the noise not being there, I'm amazed at how subjectively more refined the car feels, with only the previously-noted slight bearing noise on left hand corners remaining (but as said I can detect no play in the bearings on all 4 wheels when I rock the tyres on any axis with the car jacked so for now I'll leave well alone and monitor for any deterioration whilst keeping a look out for a good used bearing tool set). I do think the new Michelin CrossClimate2's have also genuinely improved the ride over the Primacy 4 summer tyres that were on there previously. They are super-quiet (same as the Primacy 4's, which as I noted when they went on earlier in the year, are superbly refined in themselves). They are also much better in gripping and keeping the car in-line round curvy, mud-strewn lanes which are the norm round here this time of year. At this rate I'll be keeping them on all year round and not just the colder weather!

Next job for Akoya is a good Bissell-ing of the interior to complete the valet I started the other day, some areas of carpet / upholstery are just crying out for it. I'll also give the slow-to-non-returning front seat belts a good dunking in a soapy bath as per the threads on this subject; to see if that does indeed cure their recalcitrant nature. I'm also tempted to try meths on the handbrake tray trim to see if that removes the knackered soft-touch and a colour-matched finish underneath.
You must log in or register to reply here.
Share:
Facebook Twitter Reddit Pinterest Tumblr WhatsApp Email Share Link
Top